107 tickets sold without knowing the venue 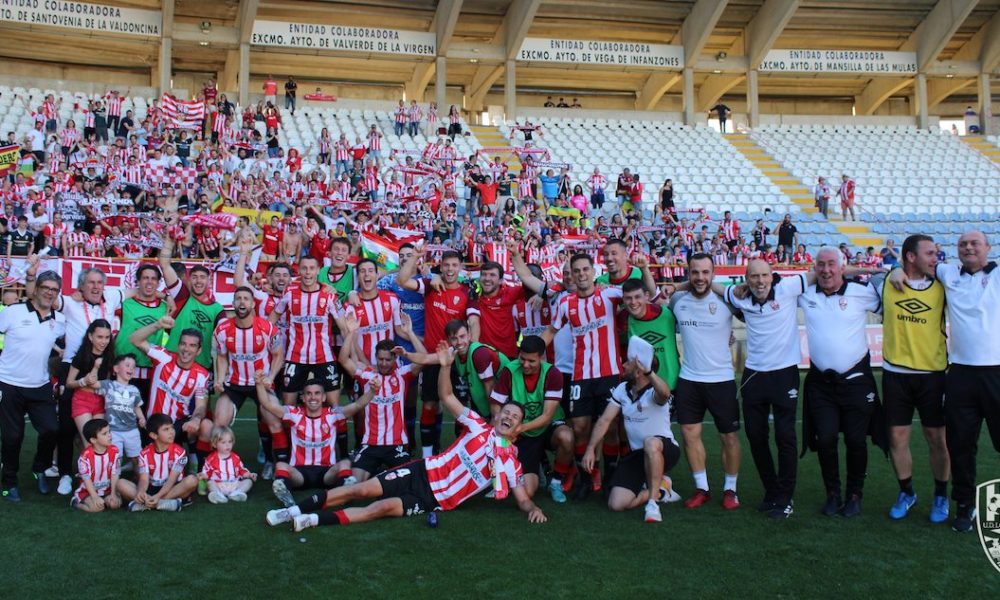 Despite the fact that it is not yet known where the match will be played and the difficulty of combining the schedule with a working Monday, UD Logroñés has received 107 ticket requests for the playoff semifinal match against Villarreal B (Sunday, 18: 00; Riazor, A Malata or Balaídos).

This Monday at 7:00 p.m. the first deadline to get these seats has ended. As always, the team will not be alone or 600 kilometers from home. Many fans are still waiting for the venue to be known to buy their ticket. For these cases, the red and white entity has explained that the RFEF will open a second sales period and will report on it, despite the fact that there is less than a week left for the clash.

The RFEF has detailed that the reservation of locations -in the next term- is mandatory for the subsequent purchase. In other words, tickets will only be sold to those who have previously requested them, within the indicated periods. In addition, it will be an essential requirement to include name, surnames and DNI.

The joy of the UD Logroñés fans for qualifying for the Second Division playoff collides with the anger towards the Royal Spanish Football Federation (RFEF) for organizing the promotion phase. With six days to go, the only certainty that the red and white fans have is that the match will be played in Galicia.

To make the anger even greater, the RFEF has forced the purchase of tickets before 7:00 p.m. this Monday. Without knowing the headquarters! There are three available that will be ‘awarded’ according to the requests for tickets made by the clubs: one in La Coruña at the Riazor stadium, another in Vigo at Balaidos and another in Ferrol at the A Malata stadium. It so happens that both Deportivo and Racing de Ferrol could play at home.

“For the purposes of capacity needs for each match, the sum of the tickets requested by each of the two contenders of each of the four scheduled semifinals will be taken into account,” explained the entity chaired by Luis Rubiales. The comments about it on social networks are continuous.

The @rfef and the management of the POs of @Primera_RFEF it’s surreal.
But how the FUCK are we going to organize a trip and buy a ticket if we don’t know where we’re playing?
But do not you see that it is nonsense? pic.twitter.com/45EHdIlbxW

But how are we going to reserve a ticket 700km from home, without knowing where the match is being played, without being able to organize a trip or where to take the hotel, or anything? …

Do we care about anything? @rfef fans, do you give a damn that the stadiums are empty?

The farce of the RFEF is surpassed at times. There is always one more twist to the federal incompetence. Without even knowing where “gaitas” is played, now you have to buy tickets a week in advance. Mandatory. They distort everything they touch. What a shame.

Grab entrance without knowing the venue, therefore without knowing in which stadium. The truth is that another success of Rubi and the @rfef in his fantastic @Primera_RFEF. https://t.co/KrwNXeD8J5

And hobbies are mixed? Isn’t a part of the field allocated for each? Stadium is not assigned and is there a deadline to buy tickets? What nonsense of Playoff has been marked @rfef They steal the essence of the Playoffs to make a fool of themselves.

To the ignorance of location also joins the designated schedule. A Sunday afternoon does not seem like the best time to go to a football match more than six hundred kilometers from home, returning to Logroño well into the night. In fact, all the teams that dispute the playoff are several hours away (Villarreal, Albacete, Tarragona, Linares and Rayo Majadahonda) except for the Galicians. At the door of the house.

Once the Promotion Playoff in the 2nd RFEF is over, you have to ask the @rfef that the neutral headquarters be removed and that the Playoff return to round trip.

They have risen @realmurciacfsad, @CD_Eldense and @cfnucia. Two of them played at home and Murcia played 80km from home. Is that neutral?

The @rfef it sucks and it’s unfortunate.
With all due respect, how can a promotion phase be played in 1Rfef in Galicia with Deportivo de la Coruña and Racing de Ferrol playing in their fields?
Either you play a double game or the venue has to be Neutral.
CORRUPT

Because the “single headquarters” seems to have come to stay. There will be no parties in the stadiums of the teams with full stands. There will be no cuts on the way to football. There will be no match day in Logroño, although work is being done to create a ‘fan zone’ with a giant screen to bring together as many fans as possible. In the absence of mass displacement, an intermediate solution at home.

How to get tickets for the Copa del Rey 2022 final at the La Cartuja Stadium in Seville: prices, stadium areas and everything you need to know
The public will return to the stadiums of the NBA. Ticket sales madness
Problems buying tickets for Deportivo-Linares
TICKETS 96

Loading...
Newer Post
F1 Drivers Championship: how they are doing after the Miami Grand Prix
Older Post
They are the richest boxers in the world; there are two mexicans