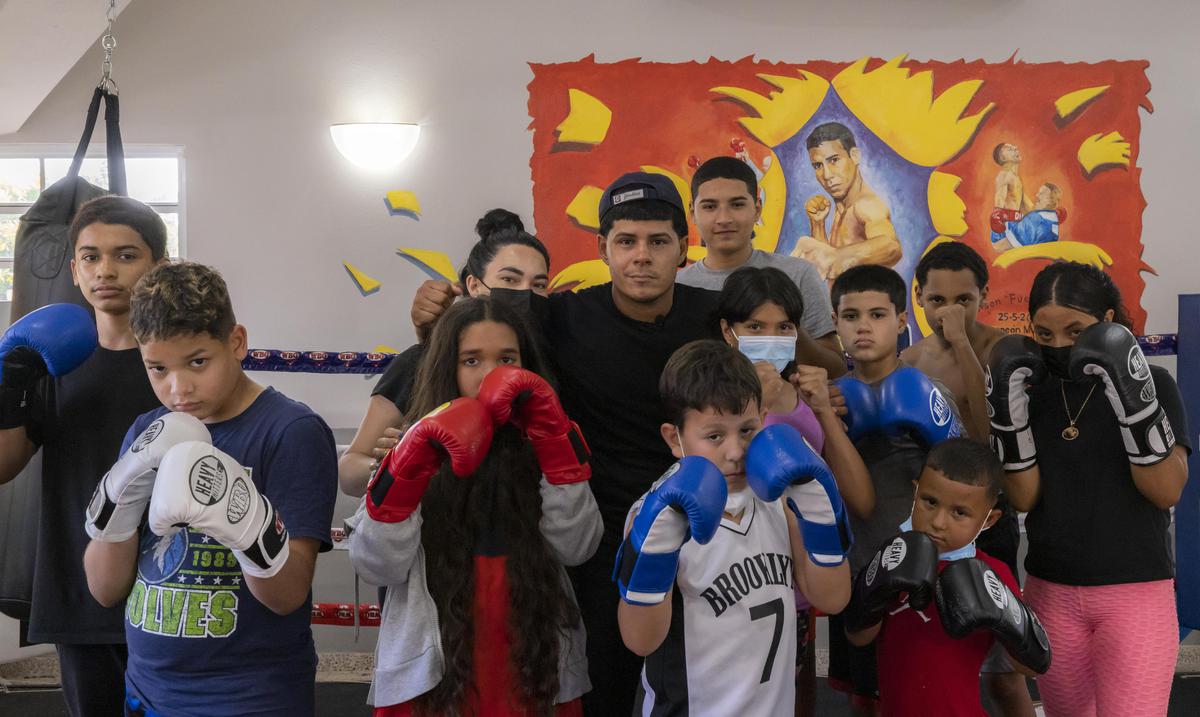 A community gym, which offers children and young people between the ages of eight and 18 the opportunity to develop in the sport of boxing and lose

A community gym, which offers children and young people between the ages of eight and 18 the opportunity to develop in the sport of boxing and lose weight while acquiring values ​​and skills to forge in them goals that will lead to a future promising, has been established within the Dionisio García Park located in the Monte Santo neighborhood of Vieques.

The modest Carlos ‘Taso’ Zenón gym, which offers all services free of charge, has been an initiative of the retired professional boxer, Héctor Mulero, who, a native of Isla Nena, has seen the recreational needs of young people and launched the nice project that allows a few hours of recreation from Monday to Friday and attendance at competitions on weekends.

“Here the kids practice the sport of boxing, do exercises, run and maintain discipline. There are females and males. We started this initiative in another abandoned building, we tried to rescue it, but it was very expensive to fix it. So a man named Carlos “Tazo” Zenón made some moves with the WBO and the mayor of Vieques and they gave us this place, we fixed it, we put water and electricity on it and we conditioned it for the young people of this island.””, he said Héctor, who had to withdraw from the ring after a bodily injury, and referring to the recently deceased president of the Vieques Fishermen’s Association and activist leader in the fight against the departure of the Navy from Isla Nena.

However, that injury did not stop him, in gratitude to life, from beginning the noble project that seeks to give a decent space to the children and youth of Viequenses; that “in addition to teaching him boxing, we give him a foundation to teach values. I believe that in life one is not born to be born, but that we are born with a purpose, to become good people and professionals. If world champions come out to me and they go far, then amen; but if I get champions of life, the better”, said Héctor.

“Here it’s not just exercises, we also teach them values ​​and discipline. We have a young man who had had academic problems; here he polished himself, we help him and now in august he goes to the olympic hostel. Those are the achievements that we want for our boys”, added the instructor.

In the place, a modest, familiar but very safe environment is perceived for the pupils of Héctor and his wife Melyssa López. Many are transported by the parents, who remain in the surroundings of the premises to collaborate in whatever is necessary. Others arrive on foot because they are from nearby communities. The place that shows impeccable care and maintenance has a large room where the ring is located, punching bags around the walls that, with photos, newspaper clippings and paintings tell the story of the boxers who have given glory to the country. They have a room to deal with any unforeseen injuries, bathrooms and a large patio where they perform the exercise routine.

Every day from 4:00 in the afternoon until 8:00 at night, Héctor and Melanie receive girls and boys, where they perform a routine of exercises and boxing techniques. Many come to the facilities looking for an alternative to combat being overweight.

“What we want is for them to have a safe place to exercise and practice boxing. We teach the sport, but it is not necessary to have a skill. There are children who have become extremely obese and he gives them a routine and they lose weight. Here we emphasize self-esteem, discipline, responsibility and respect for others,” said the woman.

Since they do not charge for their services and both are humble workers, the couple resorts to sales and requests for donations to be able to defray the costs for the children’s attendance at boxing competitions.

The gym bears the name of Carlos “Tazo” Zenón, the recently deceased Viequense leader who was key in the fight against the Navy and who helped the club get its current training center. (Alejandro Granada)

“When we have those events, we sell lunch, biscuits, we go to the wide street and we ask on the street. The people of Vieques are very cooperative. It is very expensive when we go to the island to compete and we pay for everything: the passage of the boat, the bus that is rented to transport us, the meals for the children. In a competition we lose more than $400. Some of the kids don’t fight, but they want to go, so we do it as reinforcement so that they stay interested, ”said Héctor, extremely pleased with the support of his compatriots.

Although the territorial circumstances of Isla Nena limit the recreational alternatives for children and young people, for this couple there are no borders, which is why -from time to time- they coordinate tours so that their pupils remain “pompiados” and understand that there are no limits when you want to achieve a goal.

“As there are no cinemas here, we tour them; I take them to the movies, to eat at a buffet that doesn’t exist here, to walk around the island to do something different from what they have here”, said the young man who, while narrating the community deed of the Taso Zenón Gymnasium, did not can hide the happiness that this service to youth brings.

Tags: boxing, We are Puerto Rico, We are Vieques
Friends of the boxer caught a shark under his yacht in Miami
Boxing: Tyson Fury lose a fortune if he doesn’t beat Deontay Wilder
Puerto Rican fighters close with two bronzes at the Junior Pan American Games | Boxing
BOXING 3117

Loading...
Newer Post
LeBron is the first active NBA player with a fortune of $1 billion
Older Post
Viral: Fans stab a referee during an amateur soccer match in Chile