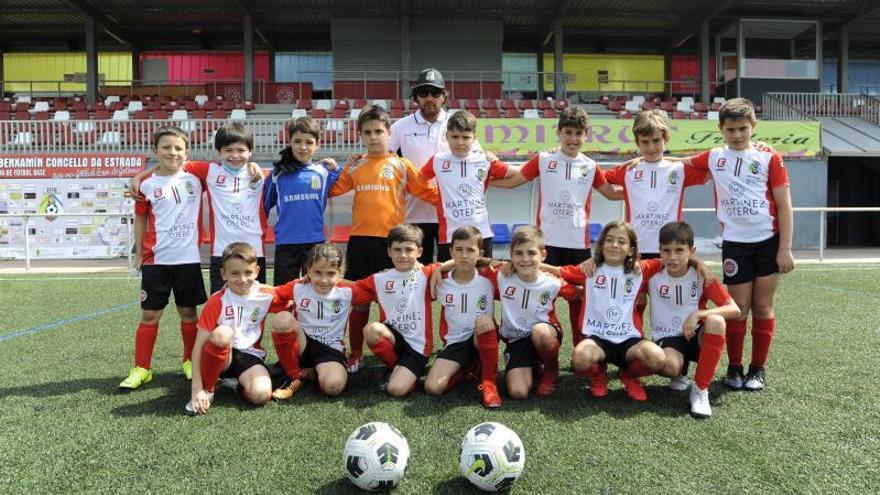 After a two-year hiatus, the Escola Estrada de Fútbol Base organizes the Benjamín Concello da Estrada International Tournament to

After a two-year hiatus, the Escola Estrada de Fútbol Base organizes the Benjamín Concello da Estrada International Tournament today, starting at 9:30 a.m., a competition that thus reaches its fifth edition. The Municipal Stadium will live again in this way the Estradense grassroots football party, with the presence of important teams from Spain and Portugal on the bill. They are joined by the Escola team, directed by Miguel Touceda and Antonio Arís.

The Estradense squad, formed from its C and D teams as it is a tournament reserved for first-year juniors, faces this tournament as a beautiful experience to enjoy. That is why the organization usually places Real Madrid in the same group as the first phase, thus giving its players the opportunity to face players who may one day become professionals in the world of football. The Escola group is completed with Lugo. His two games will be at 10.45 and 11.35.

In group A, Xuventú de Oroso, Pabellón Ourense and Porto have been included. In group B they will play in Casalanz, Celta de Vigo and Braga. Finally, in D they include Deportivo, Val Miñor and Sporting de Gijón. The first two of these groups at the end of the first phase will fight for the title in knockouts. The others will play the consolation phase. In this way, all the teams will have matches throughout the day, ending the tournament around 9:30 p.m.

The participating teams arrived yesterday afternoon at A Estrada. At night, it was planned that all of them would hold a fellowship dinner that took place at the Río Liñares Restaurant. Some of the teams will spend the night of Friday and Saturday at the residence of the Galician Academy of Public Security (Agasp).

The coach of the Estradense team, Arís, pointed out that all these activities will be a great experience for some very young players and that they have the opportunity to feel important for a few days. The selection made by the technicians between both teams allowed to form a block of fifteen players. This will lead them to have to make some discard in each call. The team is made up of Carlos, Iker, Mateo Nogueira, Hugo Couto, Lucas, Nil, Roque, Manu Calviño, Leo, Breo, Mario Goldar, Edgar, Álvaro, Anxo and Mario Carollo. “They lack a bit of coupling, since they were divided into two different teams, but they are a good generation of players,” said the coach.

As usual, this tournament organized by the Escola Estrada expects to bring together a large number of people at the Municipal Stadium, especially if the good weather is as expected on this day.

Tags: it lives, party, base
A great party at the ProAm tournament of Driving Professional Golf
River Plate had a total boxing party at the Portal de Los Andes
Chaco Hoy – boxing: Maravilla prepares to return to the ring
FOOTBALL 2704