A new unicorn for the NBA? 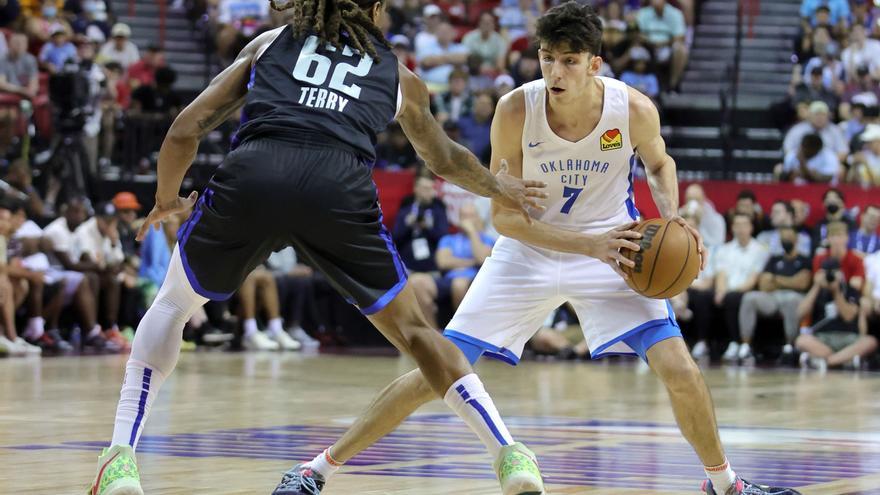 "In the NBA we have a lot of guys who are athletic, big and strong, but he's a skill player. He can shoot, he can pick the right

“In the NBA we have a lot of guys who are athletic, big and strong, but he’s a skill player. He can shoot, he can pick the right play, he can defend, he’s a 7-footer who can shoot 3-pointers… It’s like a unicorn in this league.” In January 2016, Kevin Durant greeted Kristaps Porzingis in such a laudatory way, who at that time was beginning to amaze across the pond in New York Knicks gear. In the modern NBA , that of versatility and that of the destruction of the corsets that mark the classic positions, that type of player, inside because of his physique but outside because of his ability to shoot from three points and throw the ball to the ground, is highly appreciated. there are so many hopes pinned on Chet Holmgren.

Holmgren is a unicorn candidate with a capital C. Chosen at number two in the last draft by the Oklahoma City Thunder after a single university course in Gonzaga, he is a player of 20 years old, 2.13 meters tall and 2.31 wingspan as destructive for his blocking ability as he is comfortable activating his wrist from the three-point line, as skillful in dribbling the ball to do damage in penetrations as he is resolute in short and intermediate distances. Your problem? Being a seven-footer with only 88 kilos of weight in an ecosystem as physically demanding as the NBA is very dangerous, puts its durability at risk and draws a question mark when it comes to predicting whether it will be able to reach the very high ceiling that the rest of his faculties forecast.

In his participation in the Summer League, Holmgren has left hints of his tremendous potential. In his debut, he signed 23 points (4 of 6 in triples), seven rebounds, six blocks, four assists and a steal in 23 minutes on the floor against the Utah Jazz. Later he had weaker games, especially in shooting (1 of 6 in triples against Memphis), but he has finished with a more than respectable 14 points, 8.4 rebounds, 2.8 blocks, and 1.6 steals (five against Sacramento) with 94% shooting from free throws (16 of 17 in five games) and an absolutely insignificant 42% from 3-point range.

In the age of viral videos and planetary flashes of attention, Holmgren rose to fame in the summer of 2019 at Stephen Curry’s SC30 training camp. In video of a five-on-five game, a lanky white player was seen dribbling the ball behind his back twice to get past the Golden State Warriors star’s defense, drive to the basket and finish the move with a two-handed mate. That sporadic action put Holmgren in the spotlight when he was just a youngster who hadn’t even started his junior year of high school in his native Minneapolis. “Steph Curry was the turning point for everyone to know about me. It’s every guy’s dream to attack the NBA MVP, compete against him and show him who you are. It was quite fun, a great experience”, he acknowledged years later, without hiding that when he realized that the best three-point shooter of all time was going to participate in the match, he asked to pair up with him. After that episode, his video on his Instagram received more than 500,000 views in a week and gained countless followers, some as illustrious as Dwyane Wade.

Five months later, in a high school game televised throughout the United States against Sierra Canyon, a center famous for having Bronny James, Lebron’s son, and current NBA players Brandon Boston and Ziaire Williams in its ranks, he signed nine points, ten rebounds and twelve blocks and the world of basketball began to pay more attention to that kid who his father, a former University of Minnesota player With whom he shares height, he taught with great dedication the fundamentals of basketball when he verified that Chet was already a stem of 1.88 meters at the tender age of eleven years.

In his senior year he averaged 21 points and 12.3 rebounds and was already considered the best high school player in the United States. With offers from more than thirty universities, he chose Gonzaga to make the jump to the NCAA just like his friend and high school classmate Jalen Suggs had done the previous year, chosen by Orlando in fifth place in the 2021 draft. Under the command of Mark Few, he starred in a remarkable campaign individually (14.1 points with 39% in triples, 9.9 rebounds and 3.7 blocks), but his path to the university title was nipped in the bud at the Sweet Sixteen falling to Arkansas.

Now it’s time for the big jump, to test your worth at the next level. With him you can use that expression so typical of the Americans that ensures that The sky is the limit (the sky is the limit), but his lack of kilos to beat the NBA behemoths puts a question mark on his ability to develop their skills and, above all, their durability. It’s not easy being a unicorn.

Tags: NBA, Unicorn, new
Usman Garuba vs. Facundo Campazzo; the last madridista duel of the NBA
How do NBA players cheat on their wives? Eddy Curry’s version
NBA: The obsessive workouts that have made Curry the best shooter in history
NBA 3159