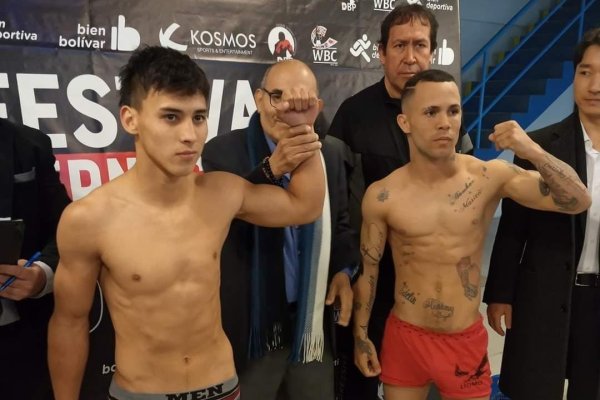 Requires update
In order to play these files you need to update your browser or update the Flash plugin.

His trainer, Sergio Medina and the boxer himself went through the Pasión Deportiva microphones analyzing the fight, the future and present of Axel Medina’s career and the reality of San Luis boxing in its male and female versions.

“We arrived in Bolívar on Wednesday. The weigh-in was this Friday, but we had some problems, because the rival had an extra kilo, and the category is super flyweight, which is for a maximum of 52,150 kilos. Then. the fight almost went down. What we talked to the promoter is that there are four fights in which the winner disputes the world title, so they could not allow them to have a higher weight. The deal is that he is eliminated, but the fight is disputed the same, “explained Medina.

Continuing with details of the fight, he stated: “The broadcast begins at 9:00 p.m. on Channel 9. We have prepared well. It’s our third professional fight. We are going to try to leave San Luis and Argentina very high”.

Regarding women’s boxing, she said: “Last Saturday we had the regional fights against Mendoza, they competed in the Regional Championship to qualify for the Argentine Tournament. Three girls qualified: Brenda Fertonani, Adriana Barrientos, and Paola Jofré”.

At the end of the talk, he highlighted how his gym is working: “It’s in my house, in the Eva Perón neighborhood. I have an average of 150 guys training, five professionals, fifty amateurs, and then guys who train, but are not boxers yet. Good boxers are coming out.”

Andy Ruiz, just as powerful, but in better physical shape
The most dangerous boxers that El Canelo must face to be the best
Evander Holyfield: From driving a $150,000 car to this…
BOXING 4180

Loading...
Newer Post
Juan Toscano will not renew with the Warriors; he will be a free agent
Older Post
He accepted the challenge and has an opponent for his return to boxing