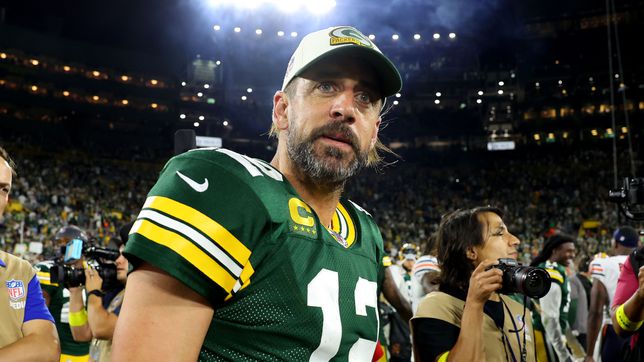 Aaron Rodgers, quarterback of the Green Bay Packers, has openly declared consuming ayahuasca to improve his performance in the NFL and has now just

Aaron Rodgers, quarterback of the Green Bay Packers, has openly declared consuming ayahuasca to improve his performance in the NFL and has now justified his actions by saying that this plant is not a drug.

During his weekly participation in the Pat McAfee Show, the Packers quarterback justified the consumption of ayahuasca because it is a plant that grows from the ground and is not like aspirin or cough syrup that are created by a pharmaceutical company.

“Putting the drug label on ayahuasca or marijuana creates a prejudice. […] Ayahuasca is not a drug. It has properties within it that have hallucinogenic capabilities, but it is not a drug. We are talking about a plant”, declared the QB of the Packers.

Two weeks into the 2022 NFL season, the four-time MVP has 429 yards, two touchdown passes and an interception after completing 41 of the 59 shots he has attempted.

YOU MAY BE INTERESTED: Tyreek Hill begins to prove that he does not need Mahomes

What does the DEA say about ayahuasca?

According to the DEA Controlled Substances Act, the hallucinogen dimethyltryptamine, the active principle of ayahuasca, is found in catalog I. This category includes drugs, substances or chemicals that have the potential to be addictive, that have no medical use accepted in the United States and are not safe for use under medical supervision.

Summary of Dallas Cowboys vs Kansas City Chiefs, Week 11 of the NFL
What is the salary cap in the NFL and how much is it this year?
When do pre-sale tickets start for the 49ers vs Cardinals?
NFL 472