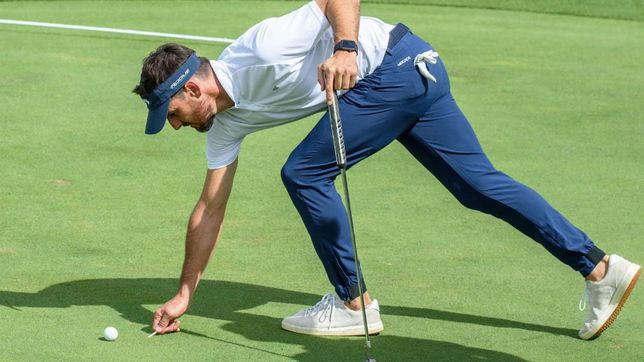 A massive Pro-Am, in the morning and afternoon, has opened the doors of the first edition of the Bizkaia PGAe Open that will start on Thursday unti

A massive Pro-Am, in the morning and afternoon, has opened the doors of the first edition of the Bizkaia PGAe Open that will start on Thursday until Saturday in the Meaztegi public field. Located in the old iron mines of La Arboleda, the professionals were full of praise about the state of the course, especially the greens “fast, bouncy and hard. I haven’t played greens like this for a long time”, was the general comment. At today’s event, 34 teams of 5 players each (one professional and four amateurs) were registered. Among the amateur players were former Athletic player Aritz Aduriz; the former coach and sports director of the women’s Athletic Joseba Aguirre; and Edorta Rahm, father of Jon Rahm.

Carlos Roca, director of Meaztegi Golf, “the objectives of this tournament is to make this great design by Seve Ballesteros known beyond the local environment; that all junior and children’s projects and programs have a place to watch and approach golf. In addition, we have linked this professional tournament with many recreational sports activities that will be organized in parallel on Friday and Saturday, such as gastronomic corners, games and golf contests to bring this sport closer to the general public”.

When Seve Ballesteros designed this jewel in this corner of the Biscayan mountains, as a great defender of mass golf and a visionary, he conceived the course as a public course accessible to all but capable of hosting a high-level tournament, and above all sustainable. , which is why the course is only irrigated with rainwater, “and despite the drought, we have taken advantage of the stored water to preserve the greens and tees,” explains Iñigo Moral, a Meaztegi professional.

Iñigo Moral, a professional since 1987, a player on the Challenge Tour for 5 years, winner of various international tournaments, has been at the club for 12 years, “and few people know that this is a public course, that for 2 euros they can train and for 15 they can play the field of P&P”. Since the Diputación has been involved in the management of Meaztegi, the change has been radical, improving the greens, bunkers, fairways, the whole general, without losing the spirit of Seve. “We have highlighted the S and B of the 18 bunkers, which are his signature. Seve left us an impressive legacy here. A camp. You have to come and meet him.”