After F1, now Rappi points to football with a sponsorship of the Colombian National Team 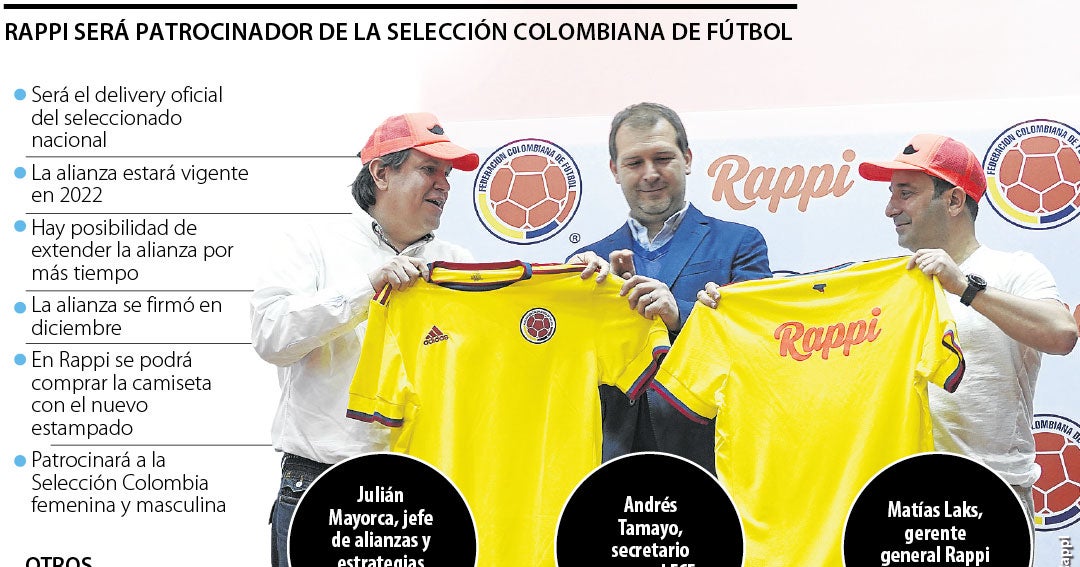 The Rappi platform yesterday became one of the official sponsors of the Colombian Soccer Team. With this, it becomes the official delivery of

The Rappi platform yesterday became one of the official sponsors of the Colombian Soccer Team. With this, it becomes the official delivery of the selected one.

The Colombian unicorn will join iconic brands that sponsor the soccer team such as Cerveza Águila, Bancolombia, Homecenter, Movistar, Servientrega or Adidas.

The National Team is in fourth place among the most valued South American teams. A study by BonusFinder.co indicated that its market value would be around US$301 million. In first place is Brazil (US$927.8 million), followed by Argentina (US$784.8 million) and Uruguay (US$484.4 million).

The games also move the local audience. For example, the match between Brazil and Colombia on November 11 had 24.98% of the audience and in the match against Chile in September, it was 21%.
Under this scenario, the company will be able to use the platform to reach a wide audience.

Matías Laks, general manager of the platform in Colombia, stated that one of the factors for which this decision was made was to unite two great Colombian symbols. On the one hand, the Colombian National Team; and on the other, a Colombian company that has been very successful and was the first unicorn startup in the country. “This is not a transactional alliance for us, what we want is to be in the hearts of Colombians with something as representative as the National Team,” Laks said.

The alliance will govern during 2022 initially, highlighted the manager; however, there is a possibility that this contract may be extended.

On the platform you can buy the shirts of the National Team with the new logo. They will be within your Turbo service; that is, they would arrive within 15 minutes. The company is studying the gradual addition of new options, such as deliveries inside the stadium or ticket sales; however, this is not a fact, at the moment. The company also reserved the value for which this sponsorship agreement was signed.

This is not the first approach of the Rappi application in the world of sports. Also done in Formula 1. During the Brazilian Grand Prix, the McLaren team’s single-seaters carried the logo of the Colombian company.

In this way, it is the third brand in the country to reach Formula 1 and the first to sponsor McLaren in one of its competitions.

These moves are part of the company’s business strategy to position its new Turbo service, a niche that is competed with apps like Jokr.

Adidas extended sponsorship to Colombia until 2030
The sports brand Adidas announced in September 2021 that it was extending its sponsorship of the Colombian Soccer Team until 2030, for a sum of more than US$82.3 million. This figure represents a growth of 52% compared to the previous value that had been signed. Likewise, bonds of up to US$13 million were agreed upon in the negotiation, according to the performance of the selected tricolor. At the closing of the deal, the brand also paid US$3.5 million. The brand would be interested in sponsoring other Latin American teams, which would add to the four it already has and the more than 20 globally.

Tags: Education, sightseeing, Bags
Cristiano becomes the top scorer in football history with 807 goals
Dwayne Johnson’s Sneaker Brand Signs Multi-Year Deal With UFC
The situation of Mercedes in F1 is not fun at all, afflicted the director of the team
FORMULA 1 1314