After the debacle of 2014, Brazilian football was opened up to foreign coaches and the fans ask for them… Argentines 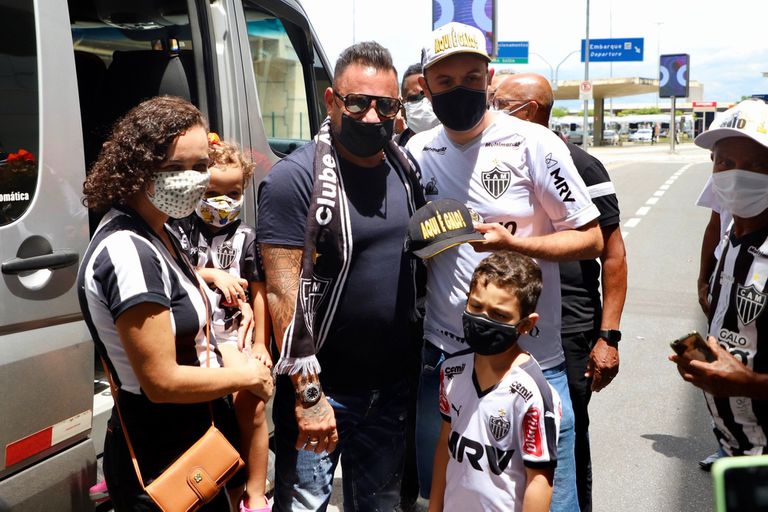 SAN PABLO.– What yesterday was classified as a trend, a boom, is now part of a consolidated reality. In Brazilian football, whenever a club finds i

SAN PABLO.– What yesterday was classified as a trend, a boom, is now part of a consolidated reality. In Brazilian football, whenever a club finds it necessary to hire a technical director, signing up an Argentine or Portuguese professional seems to have become an obligation. However, the preference for Albiceleste coaches is not limited to the specialized eyes of scouts or executives from the football department, but rather It is part of the requirements of their own twisters. It is a constant that supporters of teams of any size have surnames on their lips like those of Gallardo, Beccacece and Domínguez every time they claim for a new command.

The multistellar example Atletico Mineiro it’s cool and it’s explicit. After winning the Brazilian Championship (after 51 years) and the Brazilian Cup, the historic coach Cuca resigned on December 27, alleging “personal problems.” Despite the surprise, the Galo leadership did not waste time with regrets and immediately went after the Portuguese Jorge Jesus, champion of the 2019 Copa Libertadores in Flamengo, and who had just been fired from Benfica.

Jesus’ delay in responding to the offer exhausted the patience of those from Belo Horizonte, who quickly entered into conversations with another Portuguese, Carlos Carvalhal (he manages Sporting Braga, he has already worked in the English Premier League), and with the Argentine Eduardo ‘Toto ‘ Berizzo, who has been free since the end of his contractual relationship with the Paraguayan national team, in October 2021.

However, none of the negotiations prospered. In the middle, an e-mail sent to the Atlético leadership from the staff of Antonio “Turco” Mohamed He was referred without too many pretensions to Rodrigo Caetano, director of the soccer department of the Albinegro club, who not only opened the document, but was interested in the profile of the Argentine. The material included a presentation of 27 slide (pages), a kind of curriculum vitae where the achievements of the strategist were highlighted, as well as explaining in detail his style of play.

The talks with the former technical director of Huracán, Colón and Independiente, with an extensive and successful career in Mexican soccer, began on January 6 and, in less than a week, both parties sealed the bond.

Now. the ‘Turco’, who almost eliminated Atlético Mineiro from the 2013 Copa Libertadores with Tijuana (in the quarterfinals, then the Galo was champion), took the reins of one of the most powerful teams in the region, a serious candidate to stay with a new subcontinental title. Mohamed, who landed in Belo Horizonte this Sunday, will also have the responsibility of vindicating the Argentine coaches in Brazil who, unlike the Portuguese, they still failed to strike a blow. A major title is missing.

So that it is understood: when mention is made of “delivering the blow”, the reference is exclusively to obtaining the Brasilerão or the Libertadores. Because the work of John Paul Vojvoda, for example, who finished in the top four of the 2021 Brazilian Championship with the modest Fortaleza, a position that assured the northeastern team the historic direct classification to the Copa Libertadores. To this day, the ‘Leão do Pici’ fans celebrate it as a title and venerate the Cordovan coach, placing him at the height of their gods.

Fortaleza, despite its name, is not one of the powerful clubs in Brazilian football, but Juan Pablo Vojvoda took it to fourth place in the last Brasileirão.Instagram @fortalezaec

Nor should we detract from the merits of Hernan Crespo, who although he never made a foothold in the Brasileirão (which led to his dismissal last October), when 2021 was just getting underway, he won the Paulista Championship in São Paulo, cutting an unbearable drought of almost nine years without titles. The conquest was a respite for the fans of the Tricolor de Morumbí, once glorious, who were getting used to setbacks at the national and international level. Crespo’s departure, however, ended up being through the back door. 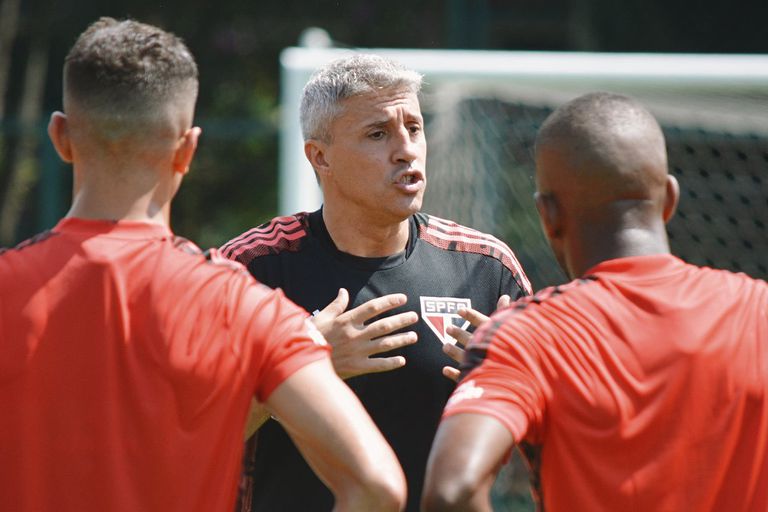 Hernán Crespo did not do as well as expected in São Paulo, but he still won the São Paulo championship in 2021.Sao Paulo FC

Another Argentine coach who recently made his mark in Brazil is jorge sampaoli, which surprised in its first season by obtaining the national runner-up in 2019, with Santos, behind Jorge Jesus’ unbeatable Flamengo, and finished third as commander of Mineiro in the 2020 season.

However, despite the fact that the leaders of the Galo met his ambitious demands, with more than 193 million reais (about 35 million dollars) in contracts, the Casildense coach decided to leave the Belo Horizonte club in February 2021 to move to French football, where he was hired by Olympique, from Marseille. Before his departure, in August 2020, he kept the Mineiro Championship, the only title of the former Argentine coach in Brazil. 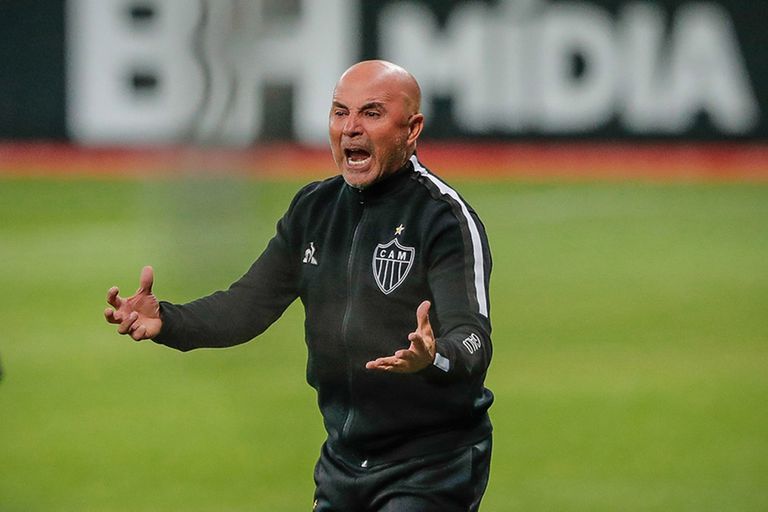 A classic Jorge Sampaoli, energetic, frenetic; when he coached Mineiro, the coach from Casilda won the Minas Gerais championship in 2020 and finished second in the 2019 national championship.@Athletic

Despite the expectations generated by his arrival, Edgardo Bauza had an oscillating performance at the helm of São Paulo in 2016. In 48 games, ‘Patón’ achieved 17 wins, suffered 18 defeats and drew 13 times. He left the São Paulo Tricolor to take on the Argentine team. For his part, Ricardo Gareca, technical director of Peru, commanded Palmeiras in 2014, in the midst of a completely different situation than the one experienced today at Verdão, the undisputed king of America. At that time, the institution was still trying to get back on its feet and the Argentine coach was unable to straighten out a team with many technical deficiencies. Tigre’s stay in Palmeiras began in June and disappeared in September.

In 2021, Diego Dabove lasted just 45 days at the head of Bahia, which later ended up falling to Series B. Further back, in 2005, Daniel Passarella took over Corinthians to replace Tite and, despite having won the São Paulo runner-up, his experience he did not go beyond 15 games at Timão. Although the recent history of Argentine technical directors in Brazil is not so encouraging, silent works such as that of Vojvoda invite the leaders of the five-time world champion country to be attentive to what is happening in Argentina. 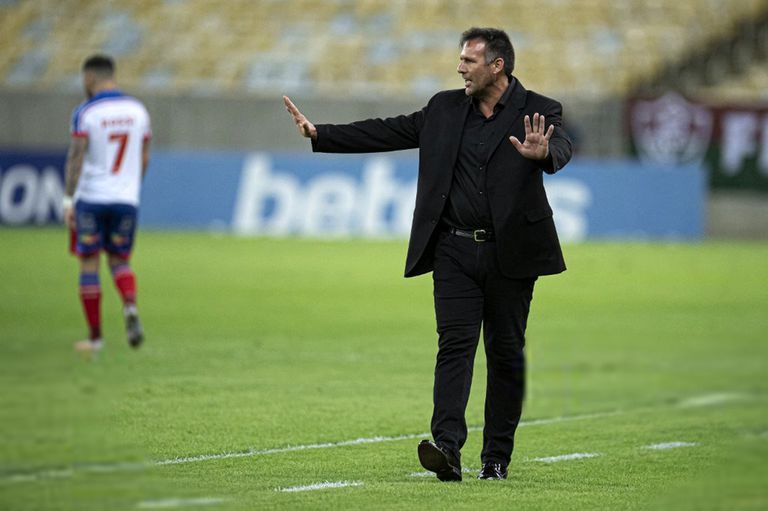 Diego Dabove did not do well in his short time in Bahia, but his only call-up was already an example of how valued Argentine coaches are in Brazilian football. Archive

The difference with the Portuguese trainers, for the moment, is in the results, in obtaining weight titles. Only between Jorge Jesus, in his Flamengo stage, and Abel Ferreira, in Palmeiras, the professionals from the Iberian Peninsula won the last three Libertadores (Flamengo 2019, Palmeiras 2020 and 2021). It is no coincidence, then, that Flamengo has opted for another Portuguese, Paulo Sousa, who resigned from the Polish national team to face the 2022 season at the helm of the Rubro-Negro from Rio de Janeiro.

In any case, it is clear that the commitment to foreign coaches has become a custom among Brazilian leaders. In the 2021 Series A, there were nine “outside” technicians hired (mostly Portuguese and Argentine), an absolute record. In 2020, the mark was seven. That number has been growing steadily since 2014. Between 2003 and 2013, only four coaches from other countries had joined Brasileirão teams. A symbol of how local strategists have been losing credit since the 2014 World Cup, which marked an absolute break in the way of thinking and acting of all components of Brazilian football.

Much further back in time, before this new trend, other Argentine coaches won titles in Brazil. Valentín Navamuel got the Pernambucano with Sport Recife (in 1942 and 1943); Carlos Volante won the Gaúcho in Inter in 1947 and 1948, in addition to the Bahiano in Vitoria (1953 and 1955) and the Taça Brasil with Bahia (1959, he directed only the last game); Alfredo González won the Gaucho (Inter, 1950), the Pernambucano (Santa Cruz 1957 and Náutico, 1963) and the Carioca (with Bangú, 1966). In addition, he was runner-up in the 1968 Libertadores in Palmeiras (lost to Estudiantes).

Jim López was champion of the Rio-São Paulo Tournament in Portuguesa (1952) and São Paulo champion (São Paulo, 1953); Dante Bianchi twice won the Pernambucano in Sport Recife (1956 and 1958); Juan Celly won the Sergipan Championship nine times between 1964 and 1990 in Sergipe, Itabaiana and Confiança; Filpo Núñez won the Rio-São Paulo Tournament in Palmeiras (1965); Armando Renganeschi won the 1965 Carioca (Flamengo) and the 1974 Paraná Championship (Coritiba); Finally, José Poy was champion of Paulista in São Paulo, in 1975.

Milan and Juventus forget about football in their Serie A match
Acts of violence throughout history in international football | sports
The “Pato” Abbondanzieri, away from football and has a new profession
FOOTBALL 2364