Aleix: “I don’t sign the tie with Quartararo and Bagnaia” 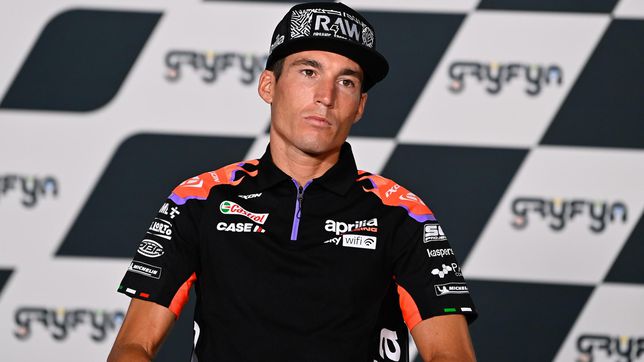 Fourth place for Aleix Espargaró for the MotoGP Aragon GP grid, which leaves him very satisfied.-What taste in your mouth does this room leave you?

Fourth place for Aleix Espargaró for the MotoGP Aragon GP grid, which leaves him very satisfied.

-What taste in your mouth does this room leave you?

-It was a very stressful day. I got to the box a bit exhausted, because after the two crashes on Friday, I knew I was fast, but I had lost confidence. I didn’t feel comfortable and I didn’t want to fall again, that’s why I didn’t get into the top ten. In FP4 I regained a bit of confidence and for Q2 I only had one bullet. I knew that either I qualified well or there would be nothing to do with the Ducatis. I did a pretty decent lap and fourth is fine, because the three Ducatis are in another world. Fabio and I are outpaced by ten kilometers per hour on the straight, so fourth place is good.

-Is it your best room?

-Yes, definitely. It’s a track where I had the illusion of fighting for pole, but seeing the level of the Ducati… We didn’t go over 340 and they did 350, plus my two crashes yesterday. I was very tense driving. With the race tires we have turned the situation around, we have improved the bike and I have found myself with very good sensations. I’m leaving happy.

-What happened in Q1 with Marc and then with Di Giannantonio?

-They were all waiting on the back straight and I don’t have much more to say. And then I snuck in and tried to stay out of the racing line, but ‘DiGia’ snuck in and it felt like I bothered him, but he was out of the racing line too. Race Direction has also understood it that way and it has come to nothing. Then I stayed in the box because I saw that everyone was waiting again. I decided to wait until the end of it all, to do a clean lap and I did 46.5, which is a very fast time.

-Will he get a calculator or will he go for it all from the beginning?

-What calculator? Calculator can be taken out by Fabio. I have to go all out, to the limit and try to cut back, but we have to be realistic, because the Ducati here are very strong. But I also have a very good pace, so I’m going to go full throttle and try.

-Do you see it feasible to fight for victory?

-In terms of pace I’m closer, but it is true that tire consumption is high here and the Ducati, having more speed, can afford to spend a little less in the acceleration phase, because when they put the bike straight they have a lot of speed. We can’t do that. We will have to use our heads and not explode the tire at the beginning of the race.

-Fabio has said that he only has turn 5 as an overtaking point here. And you?

-I think there are quite a few more places to overtake here. My bike is quite stable under braking and I’m braking well with the front tire we’re going to race with. In the morning I suffered because it was cold and I couldn’t mount that tire. Overtaking zones don’t worry me. What worries me is not wearing out the rear tire.

-The key to the race?

-Do not break the rear tire. And it won’t be easy to put up with the Ducati without breaking it.

-Is it worth finishing ahead of Quartararo but behind Bagnaia?

– Shall we sign the tie? If it wasn’t Aragon, yes. Being Aragon, I would like to fight for victory. I don’t care about the draw.

-Do you like the new schedule for next year?

-I’ll answer this after I try it. One of the things that maturity gives you is knowing how to wait a bit and, if I don’t like it, I’ll say so clearly. Let’s try it, it might be fun.

MotoGP: Rossi joins the MotoGP show of support for Maverick
the family sports car dresses up for racing
Motorland renews with MotoGP in alternation until 2026
MOTOGP 809