Aleix: “We have a good engine plan for what remains” 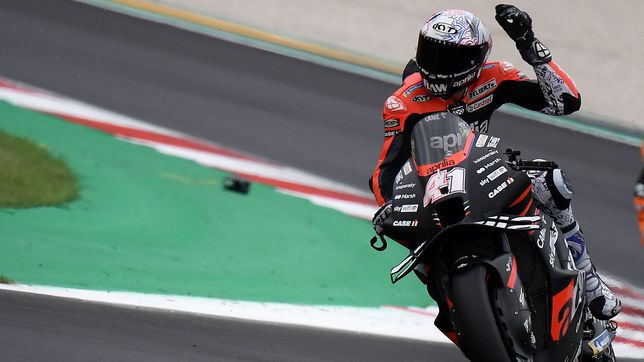 Aleix ended up satisfied with his fifth place in Misano despite losing third place in the World Cup to Bagnaia and he remains positive after two appointments that “concerned him quite a bit”.

-What do you have to say after this sixth place?

-Satisfied with the result. The truth is that I haven’t been very competitive throughout the weekend. In the race I didn’t feel bad, especially in the first two thirds I was competitive, not enough, surely. There was a moment when I thought I could catch Fabio, but I haven’t been at Maverick’s level. The truth is that Maverick here in Misano is always very fast, in the changes of direction I couldn’t have his speed. And, nothing, I already said it at the beginning of the year, that these two, Austria and Misano, worried me a lot. two sixths. Before Assen I was at 32 points, now I am at 33. You have to be positive.

-The key to your career?

-Not having left later. I made a very good start, but I think that if I had been there in the first laps, third or fourth in the group, behind Maverick, maybe I would have held on, because there have really been 15 or 18 laps in the race in which I have been rolling at an identical pace as them. We know that in MotoGP if you don’t do well you’re sold.

-Do you think the bike is ready to take advantage of the races that are coming now?

-Yes, we have a good engine plan for what remains, we have quite a few fresh engines left. There are races outside of Europe where this year we have perhaps been more competitive than the Yamaha and the Ducati. So I am very positive, I have saved within all these races. Of course I would have liked to have made up points, but we’ve been through difficult circuits and I’m still at 33 points, which isn’t a lot. I’ve done something right so far to be 33 points behind the leader, so we’re going to trust.

-At the moment Pecco looks very solid and very strong.

-Perfect, 33 points behind the leader.

-Is Quartararo still the rival more than Pecco?

-What do you want to do, first or second?

-Third in the championship does not matter?

MotoGP, live | Free practice for the GP of the Americas
The dates of the MotoGP presentations
The Nietos continue to be loved by their father five years later
MOTOGP 791

Loading...
Newer Post
Formula 1, drivers vs. Teams: From Sainz’s disappointment with Ferrari to Hamilton’s fury with Mercedes’ strategy
Older Post
Alejandro Zendejas among the Mexicans with the most goals since 2021