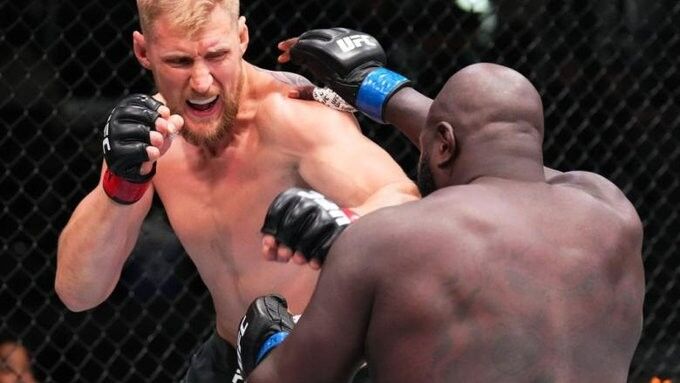 Alexander Volkov required a round to get back on the winning track this Saturday, when defeated Jairzinho Rozenstruik by technical knockoutin the s

Alexander Volkov required a round to get back on the winning track this Saturday, when defeated Jairzinho Rozenstruik by technical knockoutin the stellar lawsuit of the function that took place this Saturday.

The APEX in Las Vegas was the stage where the faces were seen at UFC Vegas 56, in the heavyweight division and with a Volkov’s forceful performance.

After his last loss to Tom Aspinall, by submission, “Drago” Volkov came out decided to meet again with the triumph and head into a title fight, and he did it in a big way.

The fight began with an exchange of punches and kicks, both of them wanting to hurt each other and take control of the fight. Rozenstruik tried to attack with combinations, but was not very successful.

Volkov replied in a big way and connected with his rival with a right hand that put him in bad shape, he realized that Rozenstruik was not well and went for the win.

A string of blows practically put Rozenstruik on the canvas, who looked defenseless, forcing the referee to stop the fight for the victory of Volkov, who wants a shot at the heavyweight title.

While, the co-main event of the night went to Movsar Evloevwho defeated Dan Ige by unanimous decision after three episodes, with scores of 30-26, 30-26 and 30-27.

Evloev was the best during the fightand took advantage of that superiority to cause cuts in the eyebrows of his rival, who ended up with blood and defeat.

Loading...
Newer Post
The Colombian delegation goes for the golden booty in boxing at the Bolivarian Games
Older Post
NBA: Dejounte Murray to the Hawks in exchange for Danilo Gallinari!