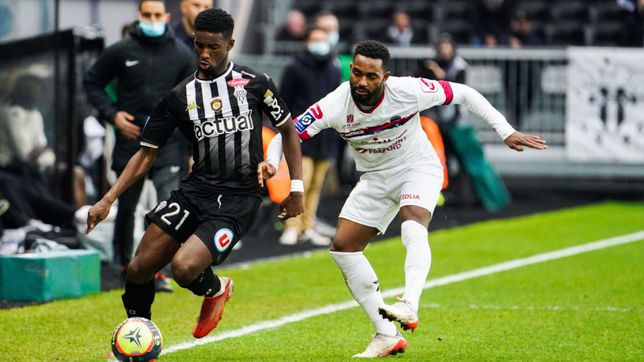 Mohamed Ali Cho is already on his way to Real Sociedad. His signing, if nothing goes wrong in the next few hours, is imminent. The San Sebastian

Mohamed Ali Cho is already on his way to Real Sociedad. His signing, if nothing goes wrong in the next few hours, is imminent. The San Sebastian club hopes to close the operation with Angers, its original team, this very next week. Both entities finalize the details of the payment conditions of the transfer, and the matter will already be settled. Real Sociedad is going to bring to LaLiga one of the firmest promises of French football, the player who has raised the most expectations in Ligue 1 in the last season, with a staging that has attracted the attention of many European clubs and who has stood out in the always demanding France under-21 team. There are those who compare his irruption in the elite with that of Kylian Mbappe, a comparison that does him a disservice, because it generates expectations that if he does not meet, can cause disappointment and unnecessary pressure, but that is also how football works in the Currently, always looking for similar cases to present to players who are not so well known at the moment.

The references that Mohamed Ali Cho has in Zubieta are unbeatable. They have been following him for a long time in the ‘recruitment unit’, preparing a report on his progress, qualities and future prospects, reaching the conclusion that he is a type of young player who is worth investing a significant amount in, betting on definitive. He acts as a striker, but because of the way he plays, he adapts very well to playing on the wing, which is what Real were looking for. He will bring speed and power to attack the spaces, with and without the ball, characteristics that are lost with Portu’s departure. In France they do not fully understand how their most precious pearl of the sub-21 decides to leave the country to play for a club like Real, when she had proposals from more economically powerful entities. There are even polls asking whether or not he is doing the right thing by signing for Real when he had the option of Olympique de Marseille in France, or also other clubs like RB Leipzig or Milan, with more purchasing power and supposedly greater sporting ambitions.

Real Sociedad has thus been ahead of important clubs, among other things because it has been working on the signing for some time, knowing its environment and presenting a project, meeting in person with its family, putting a face to those who want to bring it to Zubieta. The endorsement of work with young people has had a decisive influence, with almost like that of Alexander Isak, Martin Ødegaard or even Mikel Merino, who relaunched in Donostia, his career has been decisive. The fact that it is his mother, a French lawyer, who handles his legal affairs also has an influence, because the Royal offers him a good contract, immediate sporting objectives of level, and growth, but also other aspects such as studies and education. Zubieta’s comprehensive project has seduced Mohamed Ali Cho’s entourage, who is getting closer to becoming a new Real Sociedad footballer. Everything indicates that he will sign a long contract, for five seasons (until June 2027). In the San Sebastian club they hope to close the operation as soon as possible, throughout this coming week. He negotiates with Angers the details of the payment of the 12 million in which the agreement between the two parties will be closed approximately.

Data Protection fine with 200,000 euros to the Football Federation for filtering the audio of a meeting of AFE and LaLiga
Pink Floyd and his love of football
Sevilla loses ground in fight for Spanish football title
FOOTBALL 2704