Zacatecas, Zac.- In an unprecedented visit to the city of Guadalupe, the three-time world champion in boxing, Julio César Chávez González, offered 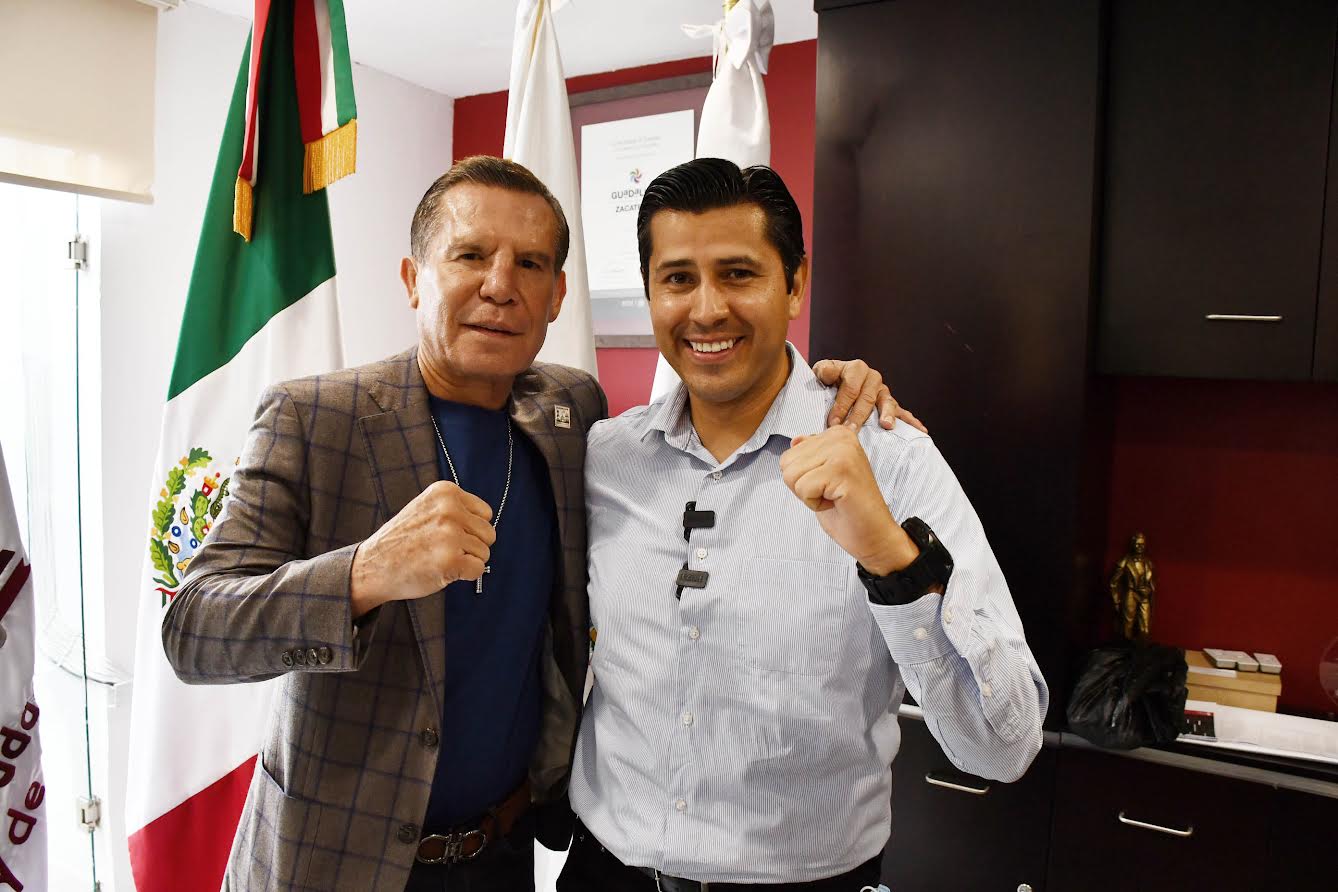 Zacatecas, Zac.- In an unprecedented visit to the city of Guadalupe, the three-time world champion in boxing, Julio César Chávez González, offered a talk about his life experience in the Auditorium of the Municipal Palace, which was attended by authorities from the three orders of government, educational institutions, athletes, coaches, sports academies and the general public from different municipalities of the entity.

Accompanied by the Governor of Zacatecas, David Monreal Ávila, and the Municipal President of Guadalupe, Julio César Chávez Padilla, the audience participated in the dialogue that the native of Ciudad Obregón held from his first steps as a boxer to reaching the world championship in three different weight divisions.

Prior to the talk, David Monreal Ávila thanked the champion for his visit to the state and, specifically, to the city of Guadalupe, as well as the other former world champions Jorge ‘El Travieso’ Arce and Érik Él Terrible ‘Morales for the boxing exhibition they will have at night in the ‘Marcelino González’ Gymnasium.

Monreal Ávila confirmed that, after speaking personally with the former boxers, Zacatecas will host major national and international boxing shows, as part of the sports promotion developed by the New Governance.

The Municipal President of Guadalupe, who thanked Chávez González for his visit and showed his life story to the public that gathered in the city, since, he said, young athletes attended, with participation in the Olympic Games, students and a large number of Zacatecans who are eager to hear about their experiences, and it was Chávez Padilla who started the dialogue by asking the three-time world champion how the dream of being a boxer was born and if he always knew he was going to achieve it.

After presenting a video with the greatest achievements of Julio César Chávez González, he expressed his gratitude to all the Zacatecans who have made his stay a blessing, “all of us who are here have a life dream, mine was not at first that of being a boxer, but a soccer player, but thanks to my brothers who practiced boxing I put on the gloves, that’s when I started to focus on my new dream.

The champion reported that his beginnings were participating in tournaments in his neighborhood and he won them, “that’s why: all dreams come true, but a lot of perseverance and discipline is needed,” he said.

He also commented that he came from a humble family, and it was in sports where he found the possibility for his parents to have a better quality of life, helping them to fulfill their dreams; Some time later he fought professionally and lasted 14 years without losing a fight, narrating the difficulty of reaching those moments in his life, because to achieve it he had to live in another city, far from his family.

He also told the attendees how, after keeping fighting to become a professional, he had the opportunity to fight for a world championship for the first time, winning it, “since then my life changed forever: I was the boxer with the most championship fights of the world, with a total of 37, as well as 10 championship defenses and having the Ginness Record of putting 136 thousand people in the Azteca Stadium”, said the former world champion.

But destiny would bring him more things: fighting for his second championship, defending it several times until reaching a third in 3 different divisions with all the difficulties that such great feats represented.

With the euphoria of the attendees, Julio César Chávez González reached the most complicated moment of his life: “not everything is happiness, although dreams are fulfilled based on effort and dedication there will always be setbacks and falls, and that is when We must get up so as not to stay on the canvas”, exemplified the Sonoran, to later recount the beginning of his problems with drugs that affected his sports career and his private life.

It was at that moment that the three-time world boxing champion addressed young athletes, students and professionals to inform them about addiction prevention, motivating them to play sports, to be better people, grateful and very dedicated to their dreams.

His final message revolved around the theme of not letting himself be defeated, searching and waiting for his dreams to come true, sacrificing himself and working hard for his future, “because dreams come true and I know they will be achieved,” Julio César Chávez concluded. .

Loading...
Newer Post
Cali will live the 1st Stop of the EuroMattress Golf Tour 2022 at Club Farallones
Older Post
“Cage” Bahamondes has a rival and a date for his return to the UFC