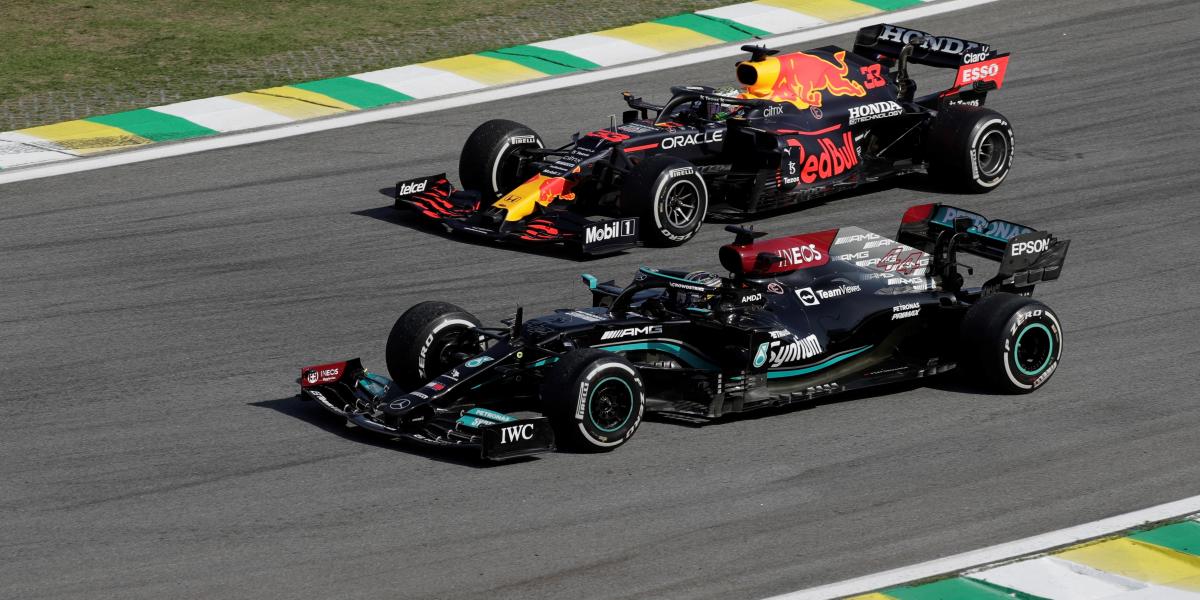 Lewis Hamilton has before him a great opportunity to put more fear of Red Bull tras his comeback from Brazil. 3 tests to go to the end of world, and this weekend the British can exert greater pressure against Verstappen to get out of Losail closer to the Dutchman with only two tests to go. Although it is unknown what the performance of the F1 cars in Qatar will be when they make their first debut in F1 with this track, which was created thinking exclusively about MotoGP, Hamilton He starts as a favorite because of the long straight that presides over this track, of 1,068 meters.

The 7 times world champion rode in Brazil a new internal combustion engine that resulted in a 5-position penalty for Sunday’s race, which were not relevant to the final result of the Brazilian event due to the enormous top speed it exhibited Hamilton with that new ICE. Red bull suspects that power improvement in the Mercedes engine, as does the flexing of the rear wing of Lewis at high speeds, which would allow Mercedes Reduce your air resistance and increase your straight top speed. With that uncertainty you get to Qatar, coupled with an enormous tension between Mercedes and Red bull for all the mess of Brazil: the disqualification of Hamilton of the ‘qualy‘on Friday and the subsequent incident between Max and the Englishman on lap 48, which Mercedes requested to be re-investigated.

Toto Wolff, Mercedes boss, he was very angry at Brazil with the decisions of the FIA, hinting that all of them went against Mercedes and in favor of Red bull. Meanwhile, the FIA ​​denied that there was any kind of favoritism. And for his part, Red bull He is still suspicious about whether those of the star have reached the peak level shown in Brazil improperly.

The battles in the offices in these last three races look for a long time. It only seems the beginning of an end full of requests from both sides. And on the track, the big question is whether Hamilton’s engine will hold up to the enormous level exhibited in Brazil.

This is the layout

The Losail Circuit was created to host the MotoGP World Championship from 2004. This weekend F1 visits this track for the first time, which is 5.4 km long, 16 curves (6 to the left and 10 to the right) and a very long straight of 1,068 m. On that straight is where the only DRS zone of the track will be located, so the braking of Turn 1 will be the clearest point of overtaking, if not the only one. Due to the length of the straight, a lot of slipstream and DRS overtaking is expected. And also, in qualifying, many teams will look for their two pilots to help each other out.

In Red Bull they are clear: If Mercedes can maintain that engine power until the end, it does not look good “, warned Helmut Marko, adviser of Milton Keynes, despite the advantage of 14 points that the Dutch has over Lewis to three runs to go. Although there is the question of whether these words are part of the ‘theater’ of both groups. In that sense, Marko believes that the loss of power of the Mercedes engine when it adds mileage (something that happens in all engines) occurs after 3 races, something for which he does not believe that it will affect Lewis from here to the end of the championship.

However, the boss of Mercedes, Toto Wolff, does believe that Lewis’s engine will lose performance as the kilometers go by: “There will be a drop in performance as with any engine. It means that even if we are going to run with this engine until the end of the season, we will certainly lose. performance”, the Austrian pointed out after the Brazilian test. Wolff ruled out making more item changes to Hamilton’s car to avoid further penalties.

Now, the ball appears to be in Red Bull’s court. Verstappen He reaches this end of the course with an older combustion engine. But Helmut Marko He considered that putting a new ICE will not prevent a large tip difference from the new Mercedes engine. According Marko, putting a new ICE in Max’s car would give him “4-7 horsepower” of extra power, while his new ICE gave Hamilton about 20 more horsepower.

The line of Losail can pass sentence this weekend. Yes Mercedes confirms its superiority with this new engine of Hamilton, the Brit could squeeze the world. Yes Lewis wins in Qatar and Max is second, in the absence of knowing who achieves the extra point of the fastest lap, the Briton could be placed only 7 points behind Verstappen with two races to go, aware that in Jeddah (penultimate test of the year), your engine could make a difference again.

F1 | Why was Sainz stopped for eight seconds at the pit-stop?
Formula 1: Vettel misses the first GP of the season due to COVID-19 | sports
F1 This is how the new Alpine sounds
FORMULA 1 1253