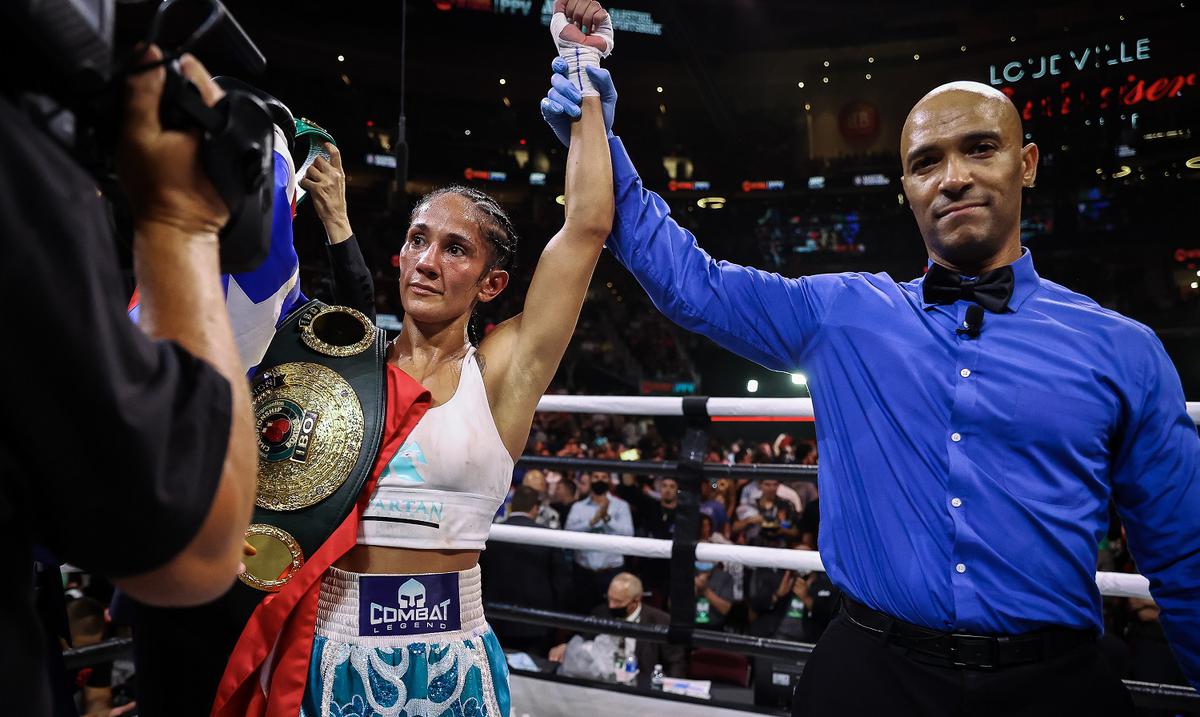 There is no doubt that Puerto Rican boxer Amanda “The Real Deal” Serrano is one of the best exponents of this sport in the country and worldwide.Hi

There is no doubt that Puerto Rican boxer Amanda “The Real Deal” Serrano is one of the best exponents of this sport in the country and worldwide.

His seven crowns, all in different divisions, are a record that is only surpassed by the Filipino Manny Pacquiao, who has eight crowns in the same number of pesos. In fact, Serrano holds the Guinness record as the first and so far the only exponent of professional female boxing to have won world championships in seven weight classes.

The 2021 that is about to end did not stop being different, after scoring forceful victories in the three fights he had. Likewise, he obtained a conquest in a mixed martial arts (MMA) event.

Serrano, once again, stood out for Puerto Rican boxing in 2021, consolidating his legend in this sport.

“This has been an incredible year. It started in March on my island, Puerto Rico, at an event in which I was the main one. That was amazing. I had my third MMA fight, which I won by submission. In August I was on another great card on Showtime where I was a co-star of the Jake Paul (and Tyron Woodley) fight, ”Serrano recalled yesterday in a telephone interview with El Nuevo Día.

Serrano&#8217;s first fight in 2021 was in March, when he defeated Argentine Daniela Bermúdez by knockout in a function that was held in the Plaza de Quinto Centenario, in Old San Juan, as part of the &#8220;Ring City USA&#8221; series. .

Her second match of the year was in June in an MMA match in which she earned a submission victory over Mexican Valentina García in the first minute of the opening round of the lawsuit held in Sinaloa, Mexico.

In August, she defended her 126-pound belts with a unanimous decision victory over Aztec Yamileth Mercado. The brawl was part of the billboard that was held in Cleveland, Ohio, and was the co-star of the program headed by Paul and Woodley.

In September, it was announced that Serrano signed a contract with Paul&#8217;s company, Most Valuable Promotions.

“This was the opportunity I needed to show my skills and get in touch with Jake. The fight in December was also incredible, ”Serrano added yesterday.

Her last fight this year was against Spain&#8217;s Miriam Gutiérrez on December 18. The brawl was agreed at lightweight (135 pounds) and was the co-star of the rematch between Paul and Woodley held at Amalie Arena, in Tampa, Florida.

This has been an incredible year. It started in March on my island, Puerto Rico, at an event in which I was the main one. That was amazing

Both Serrano and Paul emerged victorious. The Puerto Rican, who won by unanimous decision, improved her record to 42-1-1 and 30 knockouts, while Gutiérrez was 14-2, 5 KO&#8217;s.

With this result in his pocket, Serrano heads to a title fight against Irish Katie Taylor, who owns all 135-pound titles.

According to reports, this fight could take place in the first half of 2022.

Serrano and Taylor had agreed to meet in May 2020 in England, but the event was postponed due to the COVID-19 virus pandemic. Later, it was canceled due to changes in the economic stipulations that were not to the liking of the Puerto Rican group.

“I want to be the first Puerto Rican of the four-body era to do it and I look forward to having that fight against Katie Taylor. We are already working on that ”, he declared yesterday.

One champion leaves and another comes

Puerto Rico also celebrated this year the selection of former world champion Miguel Cotto to the International Boxing Hall of Fame in Canastota, New York. Cotto was announced on December 7 as the 13th Puerto Rican who will have his space in that venue. It will be exalted in June.

Loading...
Newer Post
Chucky Lozano, with a year 2021 to forget
Older Post
Monte Hermoso is preparing for a new edition of the La Nueva Golf Tournament.