America visits the home of the NBA champion 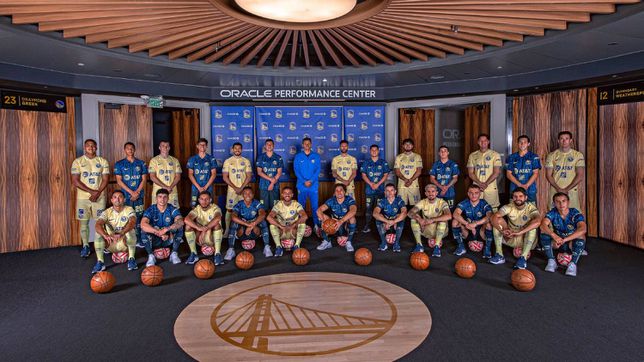 The Eagles of America took time during their tour of the United States to visit the Chase Center, home of the Golden State Warriors, current NBA ch

The Eagles of America took time during their tour of the United States to visit the Chase Center, home of the Golden State Warriors, current NBA champions.

Through its social networks, the Coapa club showed off an image in which the entire squad can be seen posing in the Warriors facilities surrounded by both soccer and basketball balls.

The image was accompanied by a thank you from the Eagles to the NBA champion for opening the doors of their facilities.

America is a whole continent, a shield that knows no limits.

Thank you @warriors for welcoming us into your home,” it reads.

Juan Toscano plays for the Warriors, the first Mexican in history to become NBA champion.

Even at the end of June, Toscano visited the azulcrema during a practice prior to their friendly match against León, in San José, California.

The team captain, Guillermo Ochoa, even gave Juan a shirt signed by him.

During their tour of the United States, America lost to Chelsea (2-1) and Manchester City (2-1) and drew against Real Madrid (2-2).

The pick in the Dallas Mavericks NBA Draft 2022: Jaden Hardy
This is how Chet Holmgren plays, the favorite of the NBA Draft 2022
NBA: Brittney Griner, sentenced to nine years in prison
NBA 3181