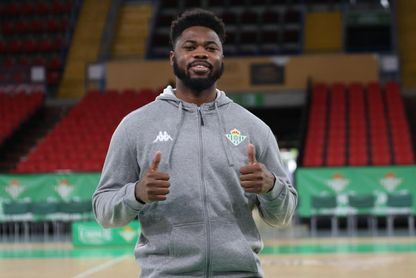 The American forward Travis leslie, 1.93 meters tall and arriving from the Ponce lions, where the National Superior Basketball League of Puerto Ri

The American forward Travis leslie, 1.93 meters tall and arriving from the Ponce lions, where the National Superior Basketball League of Puerto Rico played, is a new player of the Real Betis Basketball until the end of this season, the Sevillian club reported on Wednesday in a statement.

Leslie (Atlanta, 03/29/90) has a extensive experience in Europe, where he started his career in 2013 in the French Nanterre, from which he went on to ASVEL Lyon-Villeurbanne, says Betis in their letter to announce their hiring to reinforce the outside game of Luis Casimiro&#8217;s team.

The new player of the Sevillian team, current bottom of the Endesa League, was formed in the University of Georgia and in the 2011/2012 campaign he played a dozen games in Los Angeles Clippers, of the NBA, before starting a career that has led him to play in Australia, Germany, Lithuania and, above all, France.

Leslie&#8217;s Arrival will make up for the recent departure of Trinidadian guard Khadeen Carrington, who dissociated himself on November 16 to sign for the JDA Dijon French, and will occupy the alien token just released by the point guard Shannon evans, who has just received his Equatorial Guinean passport that certifies him as a player attached to the Cotonou Agreement.