An NBA champion launched a controversial comment against Kendall Jenner and they crossed it on networks: “Misogynous” Andrew Boguta professional player in the National Basketball Association (NBA), launched strong comments against Kendall Jenner after she and Devin

Andrew Boguta professional player in the National Basketball Association (NBA), launched strong comments against Kendall Jenner after she and Devin Booker were photographed together several days after announcing their split. His statements were classified as misogynistic and dozens of users responded.

It all started when the influencer and the basketball player announced their breakup, after two years of having been in a love relationship. According to some reports, the reason was not a lack of love, but their busy schedules and different plans for her career and life.

After, more rumors circulated about a possible reconciliation between the famous And maybe that’s how it was: they were caught together in a private club in Malibu, California, and that sparked all kinds of comments from both fans and the media and, apparently, from other characters unrelated to the situation, such as Andrew Bogut.

The place Page Six argued that this meeting was a media strategy by Kendall’s public relations department, angering a few. If there is something in which the Kardashian-Jenner clan stands out, in addition to their personal talents, it is in their marketing skills, something that Bogout took sarcastically and launched a message against Kylie’s sister through her Twitter account. . 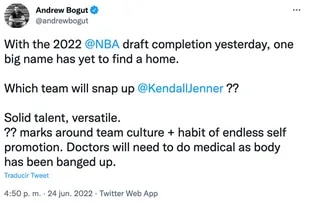 “With the completion of the 2022 @NBA draft yesterday, a big name has yet to find a home… Which team will get @KendallJenner?, wrote to refer to the breakup of the businesswoman and Devin. After, continued to rant and refer in a way that users described as offensive towards the model: “Solid talent, versatile. Brands around team culture + endless self-promotion habit. The doctors will have to do a medical exam because that body has been damaged.”

It was a series of sarcastic innuendos that turned on all his followers and that they also unleashed a wave of bad comments for both Jenner and him for considering it rude and misogynistic. “You are married, you have children and you are too old to be tweeting strange things like this”, was one of the responses in which he was criticized.

“This is a horrible way to talk about a woman”, was also another of the reactions of the twitterers, but it seems that this did not interest him and he wanted his opinion to come out of his head at any cost. She finally “apologized” to Kendall, but at the same time she made reference to the fact that when she ends a relationship with an athlete, she immediately starts dating another; That’s where her comment came from “Which team will Kendall stay with?”

Of course, there were many who also supported and agreed with his statements, as often happens on social networks when giving an opinion on a figure or some controversial situation: “I think he signed with the Washington mystics,” a man wrote in the publication. Some responded with laughing emojis, while others just liked his tweet. Some more daring users criticized one of her sisters: “I think Khloe is also looking for a new team.”

Horford is the pride: the Celtics tie the series of the year
NBA: Which players in NBA history would you put on the Mount Rushmore of basketball?
NBA celebrates its 75 years with emotional video and its figures; Michael Jordan does not appear
NBA 3181

Loading...
Newer Post
Who is Sylvester Stallone, promoter of boxing in…
Older Post
Boxing: Mayweather launches against Canelo: “He became famous for being my opening act”