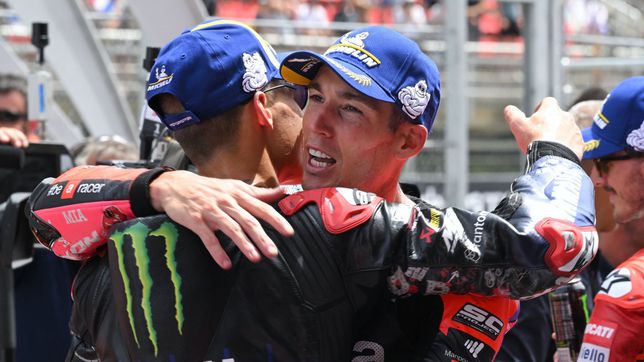 It's been a while since we talked about statistics in MotoGP. The maximum displacement has been directed towards a trend in which the unpredictabl

It’s been a while since we talked about statistics in MotoGP. The maximum displacement has been directed towards a trend in which the unpredictable reigns and that of taking into account the leader before the break or the driver who has reaped the most victories in the past on the same stage, they simply represent an anecdotal fact about which more and more regularity prevails. It is evident that this factor has always been responsible for assigning the championships, but especially in recent seasons it has become decisive in finishing the year on top.

Quartararo sums it up very clearly when analyzing his rivals. “Before the World Championship started, I thought it would be Bagnaia, but Aleix is ​​being very consistent and is always hanging around the podium.” And what does French mean by that? Because the guy from Granollers has become his biggest enemy. After five weeks of vacation where he has had time to rest, train and analyze, the sensations are clear: the Aprilia can fight for this World Championship. Noale’s house with Espargaró at the handlebars is the best on average, when it comes to riding the Italian bike it spins very fast at the apex when it leans and its spearhead is the only rider on the entire grid that doesn’t wear a zero in your locker.

Quartararo’s 21-point lead in the overall standings is simply counted as wins (three for the Frenchman to one for Aleix so far this season). But on a circuit where Fabio signed his last victory of 2021, the leader now has a pending punishment that could turn the World Cup upside down again. If in itself the fight for the crown continues to be close, although with Bagnaia (one of the favorites before the start of the course) practically out of the game with 66 points behind after a very irregular first half, the long lap penalty that awaits Fabio at Silverstone could put his leadership in trouble. Although the Frenchman understands this punishment as an extra help: “We know it will be difficult but if I’m honest, that only motivates me to do even better”.

The Frenchman has had time to “return to action in the best possible way”, act cold, recover his temper and once again show off the maturity he acquired after losing his first wound. But the sensations after the penalty in Assen left everyone around Yamaha quite hot. There were verbal protests everywhere to show his disagreement, because in the offices there was nothing to do, and the need to give up the least possible advantage is extra pressure for Quartararo at a time when everything is yet to be decided. In his favour, the leader has the experience of having defended and won a title against the lack of habit of a mentally exhausted Aleix after eleven races.

The one from Granollers is having his best season in the queen class and paradoxically, this situation makes him “tired” as he recognized at the beginning of the holidays. “I need more than five weeks to rest mentally”, Aleix stated when he started the off season but now, he is in the best position to hunt down Quartararo. Espargaró’s main objective was to return to the second half of the course with a difference of less than 25 points against El Diablo and if all goes well, the restart may finish opening its wings. Because at Silverstone history began to change for Noale’s house with the brand’s first podium in MotoGP and now is a good time to rewrite his: since Márquez has not competed for a World Championship, no one has repeated a title. And while statistics seem like a thing of the past, it’s never too late to reconsider them.

MotoGP: “The lack of public was more noticeable in Jerez than in other places”
Brand Sport Weekend: MotoGP is already promoting measures so that there is even more show
Remy Gardner’s goals for the first season in MotoGP
MOTOGP 683