Antetokounmpo, the hero who brought the Milwaukee Bucks to the NBA throne 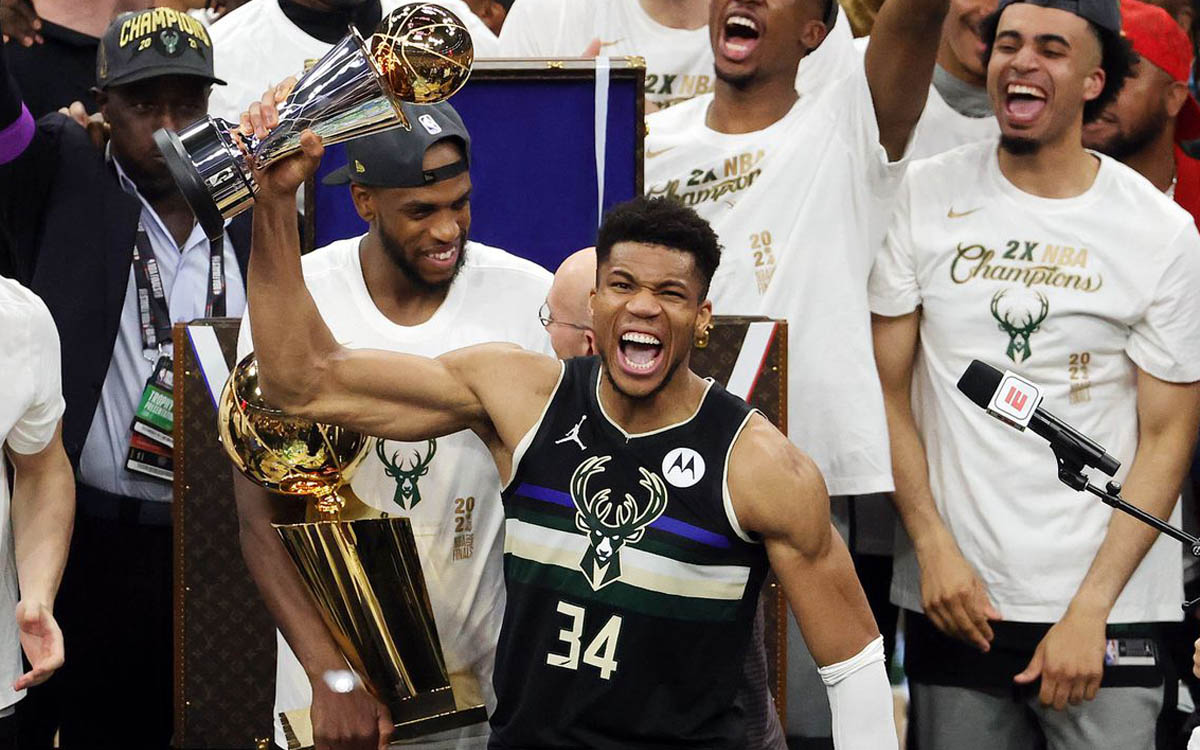 2021 saw the end of a very long drought for an NBA franchise: the Milwaukee Bucks won the Larry O'Brien trophy guided by their superstar,

Antetokounmpo, the hero who brought the Milwaukee Bucks to the NBA throne

2021 saw the end of a very long drought for an NBA franchise: the Milwaukee Bucks won the Larry O’Brien trophy guided by their superstar, the Greek Giannis Antetokounmpo, who is called to be the new ruler of the league.

With Antetokounmpo as the driving force, the Bucks were crowned after 50 years of waiting by defeating the irreverent Phoenix Suns in the Finals, who fought intensely thanks to the performances of their stellar trident made up of Chris Paul, Devin Booker and Deandre Ayton.

The regular campaign began with &#8216;normality&#8217;, because, although instead of the usual 82 season games only 72 were played, each team was able to return to their stadiums (with the exception of the Toronto Raptors), yes, with reduced capacity due to the coronavirus pandemic.

There they began to confirm to the paintings contenders from West like the Phoenix themselves Suns, Utah Jazz, Denver Nuggets and below, the Los Angeles quintets: Clippers and the defending champions, Lakers.

In the East, the Philadelphia Sixers, Brooklyn Nets, Milwaukee Bucks and the surprising New York Knicks and Atlanta Hawks were confirmed.

At the right time the Bucks grew to dispatch the Miami Heat by sweep in the first round; In the Semifinals, the Brooklyn Nets put up a tremendous battle, but stayed on the shore in a series that ended 4-3 in favor of Milwaukee. In the Conference Final, the tremendous Hawks were waiting, with Trae Young as a figure, they dispatched the favorites Sixers, but the momentum did not reach them and they were dominated in six games.

By the West, the Suns arrived at the last instance after eliminating the Lakers with everything and LeBron James; In the semis, Serbian MVP Nikola Jokic&#8217;s Denver Nuggets offered little resistance. With that hurdle cleared, a severely decimated Clippers were thrown out in six games, sealing Milwaukee&#8217;s ticket to the Finals.

Already in the NBA Finals the Milwaukee Bucks had to overcome adversity, as they were down when they fell in the first two games; It seemed that everything was heading towards the first title in the history of the Phoenix Suns, but Giannis Antetokounmpo had the last word, supported by a star Khris Middleton.

It was four victories in a row for the Bucks, that&#8217;s how they did with him second Larry O&#8217;Brien trophy in their showcases, something they did not get since 1971, when the legendary Oscar Robertson and Kareem Abdul-Jabbar they combined to win the championship.

There is no doubt that Giannis Antetokounmpo had confirmed himself as one of the best players in recent years, but the Greek always needed to complete the work, falling to the Toronto Raptures and Miami Heat.

&#8216;The Greek Freak&#8217; I came from conquering the Most Valuable Player award in the campaigns of 2018 and 2019, seasons in which he could not make the leap to glory. But everything changed in 2021, which, although he did not take the distinction, was enough to be part of the best quintet of the year, in addition to integrating the best defensive team.

His physical power and his constant improvement in his decision-making place him as the most dominant basketball player of the moment, above portents such as Joel Embiid and Nikola Jokic, although now, on the 75th anniversary of the NBA, he will have to prove what he is made of if wants to form a dynasty.