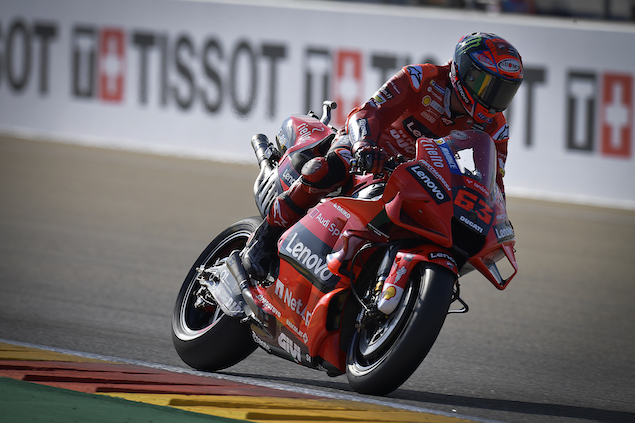 The Italian led all 23 laps this Sunday at MotorLand, where the 13th round of the World Championship was held, which was characterized by the tense fight he had against the Spaniard from start to finish.

Bagnaia led the group into the first corner while Márquez made a meteoric start as he advanced from fourth to second, partly thanks to a slight error by Jack Miller (Ducati) by losing the ideal line in Turn 1.

Despite attempts to establish differences, Bagnaia was under pressure from the first turns, while his opponent imposed Fast Laps; in turn, the two parted ways with Miller, who spent his time holding back the onslaught of Alex Espargaro (Aprilia).

In this battle, at the end of the 11th lap, the Australian lost the line and went to the escape zone of the last corner, losing two places. Although Espargaró inherited the third place, the pleasure did not last long, because Joan Mir (Suzuki) capitalized and passed him meters later.

Márquez remained as a pursuer throughout the process and intensified his fight three laps from the checkered flag, by getting alongside Bagnaia twice during the lap, but the good exit of the Ducati from turns 5 and 15 helped the Italian to retain the leadership.

The maneuver twice, in the same areas, in the penultimate passage through the goal, but his rival came out well settled again and did not give ground. On the last lap, Márquez came out of speed in Turn 1 and, despite taking first place, it fell to Bagnaia. The scene happened again at turns 5 and 12; in the latter, the hexacampeón gave up definitively.

Mir completed the podium and benefited from the result of Quartararo, who not only did not make up the lost ground at the start, but was mixed in the middle of the group. After falling to seventh in the game and being passed by Íker Lecuona and Brad Binder in the first half of the course, he spent the first part of the race in ninth place.

The Frenchman held back the attack of Enea Bastianini and Takaaki Nakagami, giving in to the Italian rookie; eventually, he benefited from Lecuona and Martín’s drop in performance to cross the finish line in eighth. Johann zarco He did not take advantage of Quartararo’s bad day and finished 17th, partly due to poor tire choice.

In the race, Espargaró extended Aprilia’s good time to finish fourth, ahead of Miller, Bastianini and Binder. It is worth highlighting the work of Lecuona, who went from tenth at the start and reached seventh place in the first quarter of the route, although he finished 11th ahead of Alex Rins, who traced from the third to last box.

Valentino Rossi was 19th, just ahead of Luca Marini. The only retirements were Álex Márquez and Jake Dixon, both due to fall.

Next week, MotoGP will be in Misano for the San Marino Grand Prix.

MotoGP | Mir: “It will be a very long race and to manage tires”
Austrian GP MotoGP classification summary: Martin’s record
MotoGP | Maverick: “Little by little we are reducing the distance”
MOTOGP 102

Loading...
Newer Post
The Australian Golf Open is canceled for the second year in a row due to Covid-19
Older Post
They confirm the injury of Edgar Berlanga, who will undergo surgery