Arandina presence in the National School of Boxing .- Sports – Hemeroteca 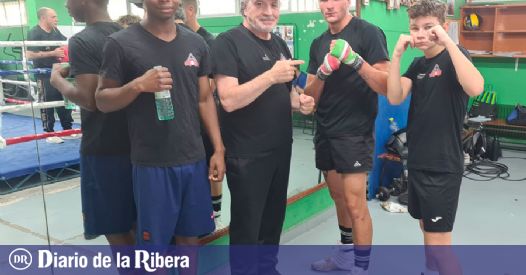 Dialá Sissokó, Sergio Calleja, and Andrés Bordianu together with their coach Juan Antonio Sánchez in the last Burgos InterclubeStarting this Thursd

Starting this Thursday, the VIII Spanish Championship of Forms of Olympic Boxing for School Ages will take place in the Asturian town of Laciana. It is a competition of initiation and contact with this sport for kids between 7 and 14 years old. Several exercises are practiced and the jury scores and issues a verdict. The mode of execution, coordination, movements, technique, and aesthetics of each participating boxer are judged.

A large number of young athletes will travel to Asturian lands, including Andrés Bordianu from Arandino in the 54-kilo cadet category. The Aranda Box Club athlete performs on Saturday. Before, he was preparing this competition last weekend in an Interclub Meeting where the Aranda Box Club also participated with Dialá Sissoko, Sergio Calleja, and Andrés Bordianu himself. They are all being trained by Juan Antonio Sánchez, who continues to work with the lower categories to bring out new riverside boxers. Some of them, including Ion Pérez, will probably be included in the program of the evenings that are being prepared in Aranda and Fuentespina for the month of September.