Artur Beterbiev, and a devastating triumph to position himself as the great attraction of world boxing 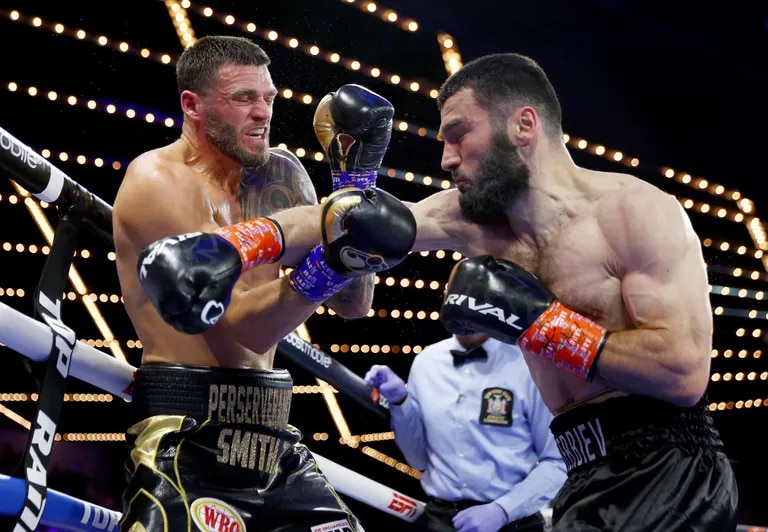 Artur Beterbyev floor the Mecca of boxing and did not disappoint. The fighter born in Dagestan reached the Madison Square Gardenin the heart of Ma

Artur Beterbyev floor the Mecca of boxing and did not disappoint. The fighter born in Dagestan reached the Madison Square Gardenin the heart of Manhattan, with a background to pay attention to: a very hard life story, an interesting amateur career (with several medals in world championships) and a late turn to professionalism that sees him at 37 as a champion of not so many fights but an unusual achievement: he won all his fights by knockout.

This Russian based in Montreal since his beginnings as a paid boxer achieved under the lights of the legendary New York stage the 18th career victory in under 6 minutes, with a devastating step on the ring. beat the american Joe Smith Jr., whom he completely devastated, and took away the World Boxing Organization (WBO) champion belt to add it to his crop of titles (he owns those of the International Federation and the World Council). Now, he would only have the one from the World Boxing Association (WBA), which is in the hands of his compatriot Dmitry Bivol, the skinny guy who recently gave Mexican Saúl a lesson in boxing. Cinnamon Alvarez. In fact, after the fight, Beterbiev said that he preferred total unification: “A unification is more motivating, I want to be the undisputed champion,” he said, despite the fact that on the ring side was the one who should be aspiring to face him, the Englishman Anthony Yard. It is clear: Today, a Beterbiev-Bivol clash would be one of the most attractive things world boxing can offer.

Smith Jr., a native of Long Island, was a respectable champion, who among his credentials boasted of having marked the retirement of the great Bernard Hopkins, whom he surpassed in 2016. However, on the night of Madison, his substance was short-lived more than a minute. Beterbiev studied him for a while from the outside, danced around and tested the jab of his rival. And when he understood that he could dominate him, he started taking the repertoire out of him. Beterbiev hits hard. Twice he forced Smith to his knee on the canvas, punches that left him standing on a jello floor. The third time he began to wobble, the referee, Harvey Dock, said enough. Martyrdom made no sense to the American, stupefied by the power and -above all- the certainty of the Dagestani.

Beterbiev holds the IBF, WBC and WBO light heavyweight belts; the only thing missing is the one from the WBA, which has BivolFrank Franklin II – AP

At 2:19 of the second round, Beterbiev dropped to his knees and put his face to the canvas, perhaps thanking and honoring what his Muslim faith dictates. There was no more than a slight grimace of satisfaction in the Russian, little fond of showing effusiveness.

Anthology KO in the bottom

Before the main match, the most explosive definition of the night from Madison Square Garden could be seen. It was during a featherweight clash between Puerto Rican Abraham Nova -who came undefeated with an impressive record of 21-0 (15KO)- and Cuban Robeisy Ramirezwith a record of 10-1 (6KO).

At 2:20 of the fifth round, a left straight from the Cuban paralyzed the spectators by sending his rival to the canvas. Nova was literally sleeping with his head outside the roped. The referee decreed the immediate end of the fight.

That of Robeisy Ramírez is one of the many stories of Cuban boxers in the last 40 years. With a remarkable past as an amateur representing his country, this left-hander born in Cienfuegos in 1993 represented the island at the London 2012 and Rio de Janeiro 2016 Olympic Games with an impressive achievement: in both he won the gold medal.

And like many of his compatriots, to achieve his dream of being a professional fighter he had to leave Cuba. Based in Las Vegas, he began another chapter of his sporting life with the backing of his vast amateur experience. On the night of the Madison he took on a rival with a longer professional career and who was heading for a world title match. “For every professional boxer the dream is to be remembered, I know that today a lot of the public remembers me as a great warrior who won two Olympic medals and I want them to remember me professionally because I became champion, unified and made great fights, like a great warrior who left Cuba, came to the United States and showed his qualities,” says Robeisy Ramírez, who goes all out for his dream of being a world champion.

Loading...
Newer Post
The world football figure who would say “no” to PSG’s millions
Older Post
Who is Rayane Bounida, the young Belgian soccer star that everyone confused with Mateo Messi