“As a football lover, I wouldn’t doubt it”: the Sanhedrin’s argument for not giving Benzema the Ballon d’Or | The spar 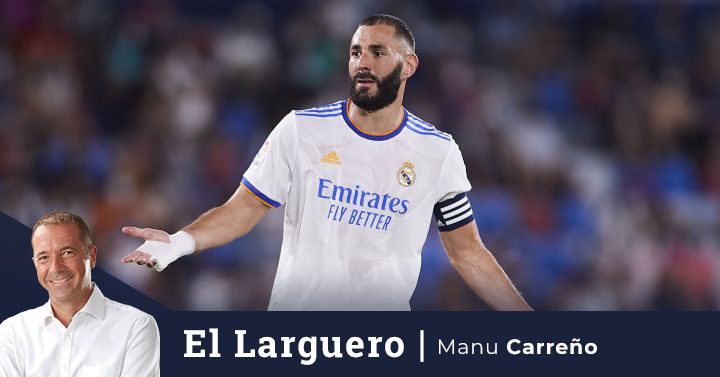 After the defeat of Spain against France in the final of the UEFA Nations League and with the controversial goal of Kylian Mbappé still kicking, '

“As a football lover, I wouldn’t doubt it”: the Sanhedrin’s argument for not giving Benzema the Ballon d’Or | The spar

After the defeat of Spain against France in the final of the UEFA Nations League and with the controversial goal of Kylian Mbappé still kicking, ‘El Sanhedrín de futbolistas’ from ‘El Larguero’ analyzes the day after the Spanish National Team, with its promising future and the players who could return to the team dynamic. In addition, the race for the Ballon d’Or is tremendously open after the performance of Karim Benzema this year.

The race for the Ballon d’Or

Karim Benzema has put the fifth gear towards his first Ballon d’Or, but along the way he will have to face such powerful and consistent candidates as Leo Messi or Robert Lewandowski. The Sanhedrin and Manu Carreño agree that Messi should be the winner of the award this season.

Gustavo López: “I would give it to Messi. It is an award that goes to those who generate more for their team and the titles they win. It will be very open between Messi and Benzema. It is a joy for the eyes to see them.”

Kiko Narváez: “As a football lover, not only scoring goals, so I would give it to Leo Messi. The second would be Benzema and the third Lewandowski.”

Raúl Ruiz: “I would give it to Messi, I would not doubt it. This year there were no clear dominators, but Messi is different. You turn on the TV to see Messi, you go to the field to see Messi and that with other players does not happens. “.

The possible return of Ramos to the National Team

Gustavo López: “Luis Enrique does not care about ages, the players go for their performance. I do not rule out Ramos’ return to the National Team. If he leaves now, he still has no other choice.”

Kiko Narváez: “I have doubts about the return of Ramos. If he gets 100% he was wearing it, but getting into this team dynamic is very difficult.”

Raúl Ruiz: “We do not have players who are indisputable starters, so if Ramos starts to play well he will take it as long as there have been no frictions between Luis Enrique and him. Of course, he has to be very well to come back.”

The present and future of the Spanish National Team

After the defeat of the National Team against France, it is clear that the Red has a great present, but an even better future.

Gustavo López: “Luis Enrique has earned the opportunity to be creative on the rosters. Transitions are not easy and Spain is taking it wonderfully. It is one of the coach’s virtues. The National Team has a great future.”

Kiko Narváez: “What most excites us is the idea. We have things very clear, you can see that against big teams we have a lot of personality. People already daydream and it is because they have reasons.”

Raúl Ruiz: “This National Team excites me. Luis Enrique has connected with everyone purely in sports. There were many doubts about the list, he was very brave taking Gavi because he had really only played two times with Barça.”

The controversy of Mbappé’s goal

Mbappé’s goal decided the final despite starting in an illegal position, so the controversy is still very present.

Gustavo López: “Mbappé conditions the footballer, he is offside. Eric arrives with the studs because he knows Mbappé is there. The rule must be changed, because if Mbappé is not offside and Eric does not touch the ball , the clubs would have fallen to him “.

Kiko Narváez: “The rule goes against the footballer and the essence of football. They force Eric García to interfere, it goes against nature.”

Raúl Ruiz: “The obligation of the central is to shoot for the ball. Whoever put this rule has never dressed short.”