Asensio and the very fine skin of football 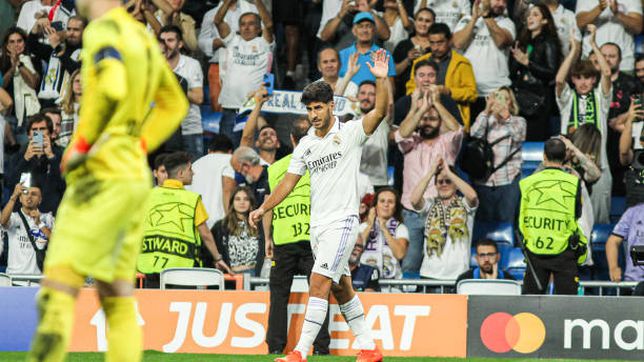 The Bernabéu whistled and cheered Asensio, all in the same match, in a matter of minutes, without paying attention to reasons other than the emotio

The Bernabéu whistled and cheered Asensio, all in the same match, in a matter of minutes, without paying attention to reasons other than the emotional impact. A large majority of fans were angry with the player and the whole of Real Madrid was filled with happiness for the exquisite shot that sealed the victory over RB Leipzig. Nobody considered that jump in affection as a contradiction. It is football, which finds no distance in the extremes of passion. The line that separates irritation from enthusiasm and contempt from fascination is very fine, the margin so imperceptible that emotions are confused with each other and move between them with an atomic volatility.

It is likely that Asensio wondered about the brutal change in record that occurred between his entry in the second half and the goal’s left-footed shot. He didn’t shout it out in anger, nor did he feel the jolt of reproach. He celebrated it, of course, and conveyed the feeling of a great moment, a very important moment, but at the same time he seemed to ponder how inexplicable and how exaggerated this game is.

Asensio knows that the change of mood of the fans does not offer great guarantees. Not so long ago, Benzema went through the same shakes. There is a class of players that does not move the fans. It doesn’t matter if they are good, bad or average. For those footballers, the fans have elephant skin. In other cases, people’s skin is very thin, always exposed to friction, to wounds. Asensio belongs to this category.

At the very least, he will enjoy a grace period, more or less short, depending on his ability to reproduce the sensations caused by his goal. Ancelotti, who is a master in these matters, has solved a case that he did not like. Asensio was part of the squad, but after the summer he had become a kind of foreign body in the eyes of many people. That radical look is also not alien to the complex world of football emotions.

The staff thinks it’s wonderful that Alaba and Rüdiger fulfill their contracts and sign for Real Madrid without paying a euro in transfers -without paying Bayern and Chelsea, but with a greedy hiring bonus for the players-, but they don’t like that Asensio squeeze out his contract and be free next year. Fans do not understand professional matters, or understand them when they benefit their football feelings and those of the club they represent.

Asensio scored a remarkable goal, delicately executed, very much in his style. A goal made in Asensio, as the ones made in Valverde are beginning to repeat. Three days after his great goal against Mallorca, he placed another splendid left foot against RB Leipzig. He was the man of the match, in a difficult game for Madrid, but nothing new. He remembered those from the previous season against PSG, Chelsea and Manchester City at the Bernabéu. Suffering nights that end brilliantly.

The German team does not have the predicament of the famous rivals that Madrid beat in the last edition of the Champions League. It does look good and some excellent players. Timo Werner is another regarding the bewildered striker who didn’t work out at Chelsea. Nkunku aims much higher than Werner. Smart, skillful, fast and deep, he will end up in one of the teams that make up the Gotha of European football.

RB Leipzig gave Madrid a bad night in the first half. The second half was equalized and Madrid took the victory with two superb goals and a message for their rivals, whatever their level and prestige. There is no worse enemy for a team than feeling good, comfortable and without difficulties at the Bernabéu. If you play at the Bernabéu, it’s better to forget about optimism, because Real Madrid will understand it as a weakness and will make you pay for it. RB Leipzig paid for it.

“When you have an open file, certain tweets do not help you”
Granada – Real Madrid, live
the networks talk about the World Cup preview
FOOTBALL 3676

Loading...
Newer Post
Tom Misch changes location: where it will be and how to buy tickets
Older Post
Why does boxing celebrate National Holidays with fights?