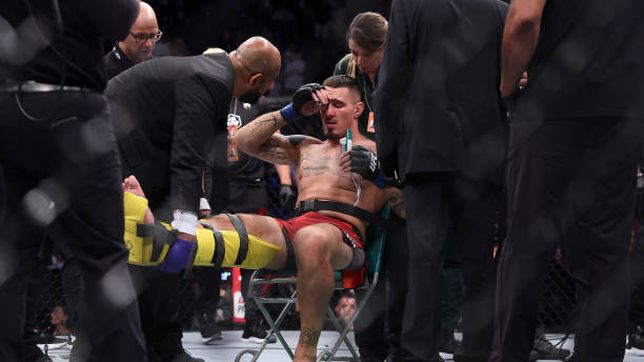 The Tom Aspinall, Paddy Pimblett and Molly McCann triplet is synonymous with success for the UFC. In March the company used the two men and this S

The Tom Aspinall, Paddy Pimblett and Molly McCann triplet is synonymous with success for the UFC. In March the company used the two men and this Saturday, in a new UFC London, the one from Liverpool joined. McCann won by KO and stayed drinking beer to see his friend Pimblett, who also complied and showed off. Aspinall had to put the icing on the cake, but nobody left the O2 Arena happy. The Englishman was seriously injured in his right knee fifteen seconds into the fight and had to leave the octagon on a stretcher with his leg immobilized. Curtis Blaydes took the victory, but a victory that says nothing. The fight is as if it hadn’t happened… the American hit the protections angrily: “I wanted to win, because it would be a blow on the table for me. I don’t know what to say. I’m sorry, ”said Blaydes crestfallen. A real shame that does more damage after history repeats itself. An injury also cut short the star of seven days ago.

The fight started vibrant. The two came out to cross blows with everything. Aspinall was violent and Blaydes nailed several hands to his chest. They were not measured nor was there a strategy involved. You for you and the KO flying over. Aspinall came in and threw his hard right hand and as he stepped in he noticed that something had broken in his knee. He fell to the ground and the fight was stopped after 15 seconds. The English gestures of pain were remarkable. He was unable to move his leg at any time. The action seemed like a normal ‘low kick’, but something broke and ended the party that the London public had mounted. The night was one of contrasts. There were great rapture points, but the memory will be one of great disappointment. Hopefully I can see Aspinall in the octagon again soon.