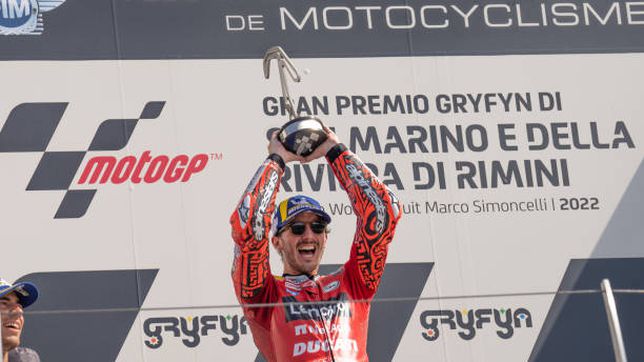 Pecco Bagnaia achieved his tenth victory in the 'Queen Category' of motorcycling in Misano, the fourth in a row after those achieved in Assen, Silv

Pecco Bagnaia achieved his tenth victory in the ‘Queen Category’ of motorcycling in Misano, the fourth in a row after those achieved in Assen, Silverstone and Austria. It is the first time that a Ducati rider has managed to make poker wins in a row, which places him among some of the most illustrious names in the recent history of two wheels.

Since 2002, the year in which the MotoGP era began, only three riders (in addition to Bagnaia) have managed to win at least four consecutive Grand Prix: the first to do so was another Italian, Valentino Rossi, the first year of the category, in the one that got seven wins in a row (from the Spanish GP to the German GP).

The other two riders to reach this figure are Spanish: Marc Márquez also achieved seven consecutive wins in 2014 (between the Qatar GP and the Indianapolis GP), and Jorge Lorenzo did it in 2015 with Yamaha (between the Spanish GP and the GP of Catalonia) Between the three of them they have 22 World Championship titles, 16 of them from MotoGP.

The Italian driver has managed to cut, in these last four races, 61 points from the World Championship leader, Fabio Quartararo. With 181 points, 30 behind the Frenchman, Bagnaia has fully entered the fight to avoid the Yamaha rider’s two-time championship. In fact, after the San Marino GP, he overtook Aleix Espargaró for second place in the championship. And the next appointment is at MotorLand, where he already knows he beat her last year.

The Keys to the Austin Race
Darryn Binder to MotoGP
Dardo from Puig to Pol: “Does not reach the potential of the motorcycle”
MOTOGP 789