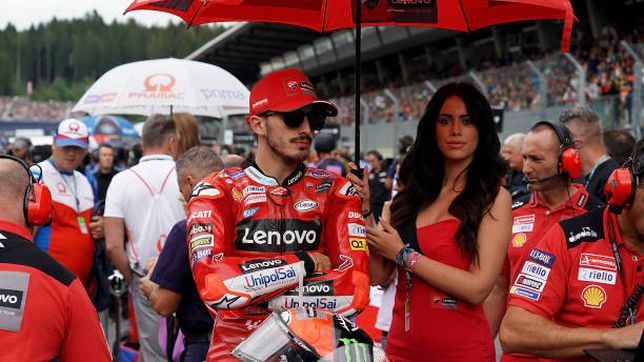 Franceso Bagnaia already revealed after his victory at Silverstone that he had a couple of aces up his sleeve before facing the races... Neither mo

Franceso Bagnaia already revealed after his victory at Silverstone that he had a couple of aces up his sleeve before facing the races… Neither more nor less than the advice of Valentino Rossi, his friend and mentor, and Casey Stoner, Ducati legend being the only MotoGP champion with the Italian bike, in 2007. Well, the winner of the Austrian GP has acknowledged that he spoke again with these two legends from the Red Bull Ring paddock and, from what he himself has told , achieved his third consecutive victory despite disobeying the famous Italian.

“I spoke to Valentino and Casey again this weekend. Rossi is like my mentor and he is always giving me tire advice. He told me not to use the soft front because it would make my race too long, but I used it anyway. I’m sure he’s pulling my ears. (Series). And Stoner told me on Friday that he should understand the situation better, based on his experience, ”he assured after his victory the third overall, 44 points behind the leadership held by Quartararo.

On his win: “It’s the best way to end a weekend. I was surprised how I started, I wasn’t really competitive and in FP4 I had a hard time going fast. In the end, we did a great job yesterday and I’m very happy. For safety, we opted for the soft front rubber and it was not the best choice, because it closed a lot on the front. In any case, I am happy with the work we have done and we will try to cut more points. Fabio, as always, is still very competitive, but we have to try.”

Of the past and reviewed with his teammate Miller, he said: “I was already having some scares with the front end and if I stayed behind I would surely have too much pressure on the front end. When I saw that he easily overtook me, I increased the pace and opened up a margin”.

And of his winning streak: “I don’t think I’ve ever had three wins in a row. I am happy because I am improving, thanks to the team, my family, VR46… We have been able to improve the mistakes, but I still have a lot to learn and reach the level of the best riders. I think I’ve taken a step forward and I want to continue like this. This is one of the easiest circuits in terms of demand and physical condition. You don’t have to push as much on the bike, you have to be strong on the brakes, but it’s not that demanding. The new chicane honestly doesn’t change anything. The old layout was better for our bike”.

Schedule and where to watch the Portimao Grand Prix on TV and online
German GP MotoGP 2022: Aleix Espargar: “I don’t understand how there isn’t a Ducati leading the World Championship”
MotoGP 2021: KTM changes boss
MOTOGP 814