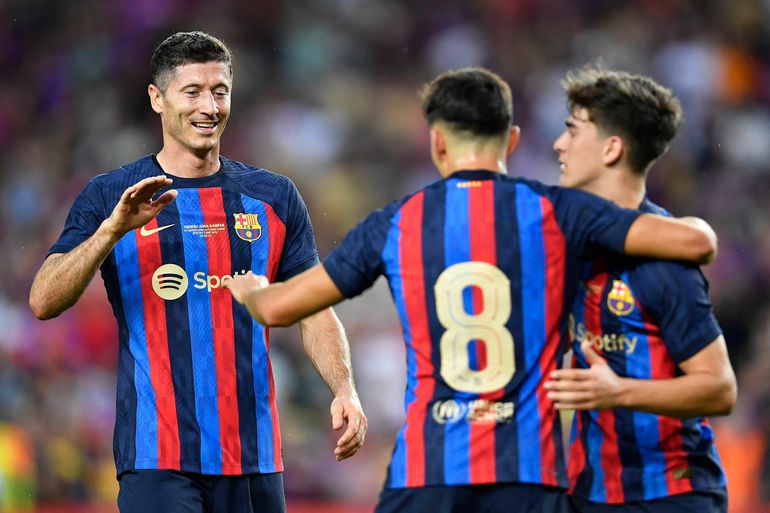 The Gamper served to present Robert Lewandowski, who was one of the most outstanding, with a goal, two assists and a feeling that he is at another

The Gamper served to present Robert Lewandowski, who was one of the most outstanding, with a goal, two assists and a feeling that he is at another level; and the rest of the signings (Raphinha, Kounde, Kessie), except Christensen, with a slight injury.

One touch, maximum two. Open ends, a luxury forward. Interior entrances from second line. Pressure, quality and aim. The vertigo had returned. All that is what Barcelona offered from minute one, a team that has recovered its historical memory, that raises its hand again warning the world of football that it wants to return.

Xavi Hernández put two of the five initial signings, Lewandowski and Raphinha. Dembélé, the wayward Frenchman was the third striker. An electric game of both extremes and Lewandowski’s tap football.

The Pole understands football at the first touch, he knows how to play with his back to the goal, he has a sixth sense for the pass and a killer instinct in the box. 33 years? Nobody would say it.

Lewandowski took two minutes and 36 seconds to score his first goal as a Barça player at the Spotify Camp Nou. He took advantage of a deep pass from Pedri, controlled with his left, and finished with his right half a meter from the baseline. The ball drew an impossible trajectory. Barça’s nine went to the corner and the public went crazy.

That was his presentation as a scorer. As an assistant he was seen at 2-0, in a combination with Pedri. The canary cut Julio González (min. 5). In 300 seconds more football had been seen in the Barça high school than in most games last season.

Barça worked like a roller, now with Busquets as a metronome, like Gavi in ​​pressure, with the subtlety of Pedri or the power of the defense. Even Ter Stegen, who only demanded it in a couple of actions in the first part, seemed different.

With Raphinha and Dembélé changing positions; the Brazilian assisted the Frenchman to make it 3-0 in the 19th minute. Ousmane has also been changed.

And as if it were a game of Guardiola’s Barça, although the comparison is impossible and even less so at this stage of the season, at 19 minutes, the azulgrana were already winning 4-0. In that action, the connection between two geniuses was once again seen: Lewandowski and Pedri.

The nine created a space and attended the canary’s heel, in another luxurious move. Before the break Raphinha and Lewandowski finished off the post and Gustavo Prete, in minute 31, was the only one who disturbed the local goal.

Xavi made seven changes at the break, and two of those who joined: Kessie and Aubameyang, made it 5-0, in a great assist from the former Milan player to the former Arsenal nine. The play was started by Lewandowski, with a great deep pass.

Pumas raised the white flag and their coach, Andrés Lillini, made three changes to seek physical freshness. One of those who came out was Alves, who was one of the best of his team in the hour he was on the pitch.

Barça were able to increase their account on several occasions, but only Frenkie de Jong was right in the 84th minute (6-0). Pumas, who had not appeared for a long time, had a great chance through Jero Rodríguez, but Iñaki Peña was splendid.

The Barça spectators left the stadium with a good taste in their mouths. Here any, yes? (This year, yes?) Too soon to say, but the sensations are unbeatable.

Incidents: 83,021 spectators witnessed live the 57th edition of the Joan Gamper trophy played at the Spotify Camp Nou. Before the start of the match, a minute’s silence was observed in memory of Manuel Mañós Gonzalbo, number 1 member of FC Barcelona, ​​who recently died at the age of 101.

FA Cup: The history of the oldest tournament in the world
Sergio Romero returns to football in Italy to regain lost ground, after a year without playing
Colombians featured in the day of international football
FOOTBALL 3684