Barcelona smiles; Betis and Sevilla don’t trust each other 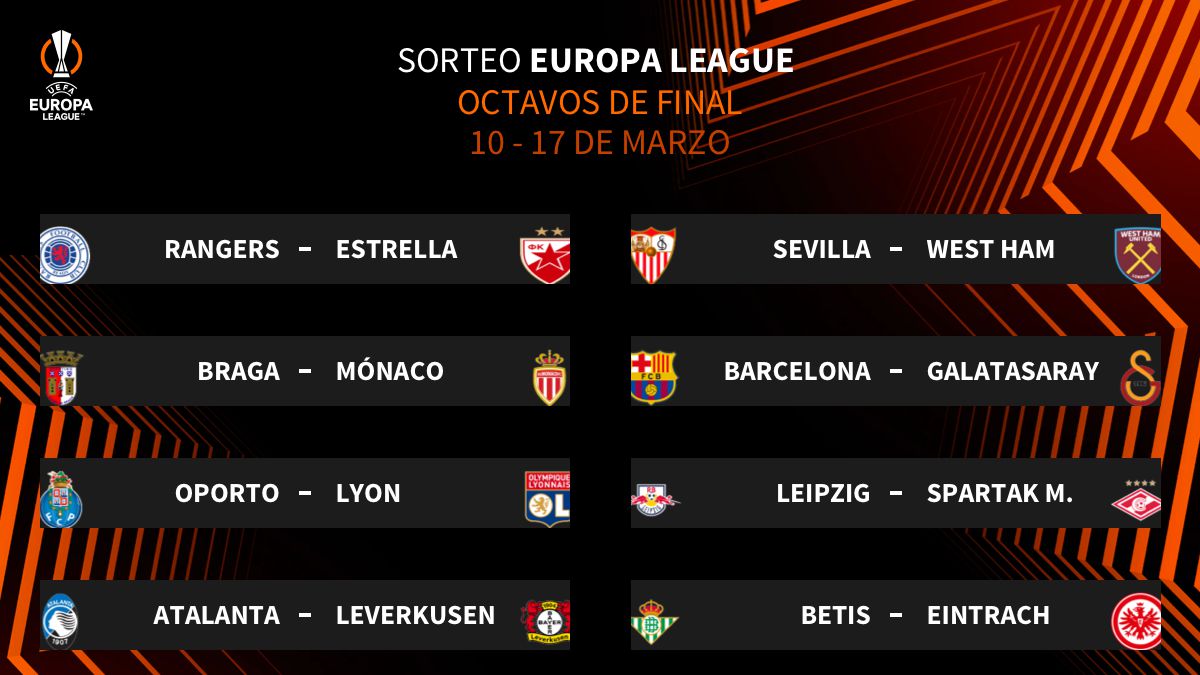 The new stop on the way to the Ramón Sánchez Pizjuán final (May 18) brought mixed luck to the Spanish teams. Barcelona can smile with Galatasaray,

The new stop on the way to the Ramón Sánchez Pizjuán final (May 18) brought mixed luck to the Spanish teams. Barcelona can smile with Galatasaray, who have come down very badly in a disastrous season. Betis didn’t come out badly either at all with Eintracht Franfkurt. On the other hand, Sevilla, six times champion, was lucky for West Ham, possibly the most fearsome adversary of all. The first leg matches are played on Thursday, March 10 (Betis’ match is brought forward to the 9th so as not to coincide with Sevilla) and the qualifiers will close on the 17th.

In one of the most difficult seasons in memory, below the middle of the table in Turkey, Galatasaray resists in Europe away from its old hallmarks. The Spaniard Domènec Torrent arrived in January and it has taken him five games to achieve a victory. He did it last weekend in agony against Göztepe (2-3). Iñaki Peña, until winter at the Camp Nou, landed in goal to replace the injured Muslera and Marcao is in charge of solidifying the defense along with the Danish Nelsson. But In a campaign of shocks only the midfielder Kutlu (24 years old), from more to less, and the extreme Aktürkoglu are saved. More was expected from Cicaldau.

The validity of English football is such for teams like West Ham that they enhance the competitive status of the Premier. Rubbing elbows with the giants in the English competition, where they are sixth, David Moyes’ side usually play 1-4-2-3-1 and have one of the players who aspire to break the market. It is none other than Declan Rice (23 years old). The midfielder aims very high. Other threats are Zouma’s power at defense, Soucek’s rigor in midfield, the attacking trio made up of Bowen, Benrahma and Fornals and the aerial game in the tip of Michael Antonio.

In the middle of the table in the Bundesliga, Eintracht did not appear as one of the teams with the biggest poster. Coached by Austrian Oliver Glasner, he has only won one of his last six matches. It is structured in a defense of three central defenders and is dangerous on set pieces. Former PSG goalkeeper Trapp is the most recognizable name in a team with a great young central defender like Ndika and a more experienced one like Hinteregger. Sow stands out in midfield and up top he has quality with Kostic, Kamada and Santos Borré.

On the other hand, the draw left two stellar clashes such as Atalanta-Bayer Leverkusen and Porto-Lyon. The rest of the round of 16 matches are: Rangers-Red Star, Braga-Monaco and Leipzig-Spartak Moscow (the second leg on neutral ground).

Europa League round of 16 schedule

Spartak Moscow-Leipzig (no schedule and no venue yet