Bastianini, like Simeone: “You have to go race by race” 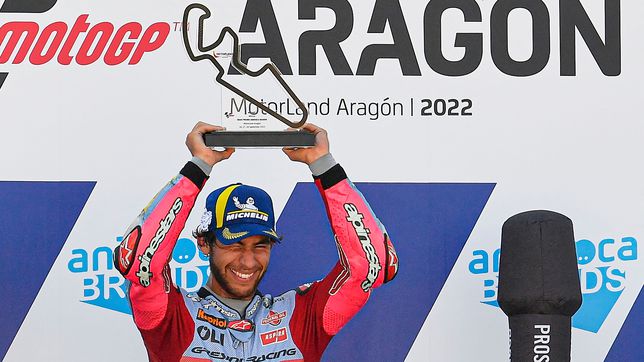 Cholo Simeone's famous "match by match" has spread to many sports and motorcycling is no exception. The last to resort to this philosophy, and tha

Cholo Simeone’s famous “match by match” has spread to many sports and motorcycling is no exception. The last to resort to this philosophy, and that he doesn’t like football at all, was Enea Bastianini, winner of the MotoGP race at MotorLand. And it is that his fourth victory of the season leaves him 48 points behind the leadership that Quartararo occupies and with 125 points at stake, plus his extraordinary state of form, they put him in the fight no matter how much he resorts to “race by race” .

Quartararo takes 10 points from Bagnaia, who has recovered 81 points in five races, 17 from Aleix Espargaró and 48 from La Bestia, who throws balls out about this: “During the race they didn’t tell me that Fabio had fallen, I told him They communicated at the end, 48 points with respect to the leader are too many to recover them, but I want to continue in this line of work and see race by race what is happening. We have a good set-up and also thinking about the future. The championship is important and now I’m closer to Fabio, but this doesn’t put me under pressure because he would have to recover a lot of points. And I have to see race by race what is happening. For me, the most important thing is to start from the first or second row because if you start further back, the race is very difficult. And my goal now is to think about racing. You have to go race by race”.

Unlike Misano, two weeks ago, in Alcañiz Bastianini was able to beat Bagnaia on the last lap: “It was another great race and another great fight like in Misano. The start was difficult because when Aleix overtook me I lost some positions regarding my place on the grid. But I got to the front and on lap 9 I was in the lead, although I made a mistake, I went wide. And so I thought about staying calm. Pecco had not made a single mistake, like in Misano, but it is true that on the last lap I started closer and was able to overtake him”.

On the final overtaking: “Seen from behind, I was analyzing where to do it, but I didn’t have a specific corner in mind. But when I saw how Pecco did the curve, I thought it was time to give it a try. In turn 7 I was going very strong the whole race and it went well for me. Pecco and the other Ducati riders are very fast and have strengths similar to mine. Always trying to overtake him is very difficult. It’s always difficult to get the tires to the right temperature, because if it’s high and you’re behind a rider, it closes up a lot in front of us. We have worked a lot before the race on this aspect and in the race I don’t stay behind the riders so as not to overheat the front tire.

The Bastianin-Bagnaia battle is also a technical duel between the Ducati GP21 and the Ducati GP22. The winner of the Aragon GP is the one from last year: “My bike is very similar to Pecco’s and I think the differences depend on the riding style. I am stronger at the entrance and he has a great cornering. And I think that’s the difference in the different sectors. On this track it was more or less easy to make mistakes at the entrance of the corners”.

MotoGP extends its calendar for 2022 to 21 Grands Prix, two more than in 2021
GP Valencia MotoGP 2021: A legend is born: Valentino Rossi and his emotional goodbye to the Moto GP in Valencia
Important public activation to promote the MotoGP in Curitiba
MOTOGP 796

Loading...
Newer Post
The Benevolent Golf Tournament of the Menorca Clinic Foundation is back
Older Post
Hundreds of Boca fans line up to buy tickets for the match with Godoy Cruz