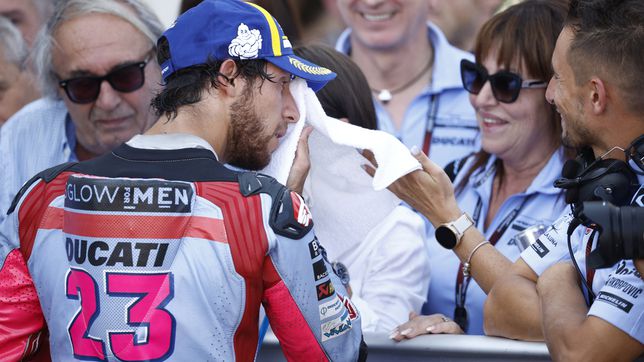 You almost have to queue in the Motegi paddock to talk to Carlo Pernat, an old racing fox who is thoroughly enjoying the great year that Enea Basti

You almost have to queue in the Motegi paddock to talk to Carlo Pernat, an old racing fox who is thoroughly enjoying the great year that Enea Bastianini is having, a rider he has represented for four seasons and has driven to the elite of MotoGP as promised. Obviously, it is The Beast who makes the difference with his results on the track, but Carleto, at 74 years old, has seen them in all colors and no one better than him to protect the interests of a pilot. He is now very aware that Ducati continues to keep open the free way that the Gresini team rider enjoys at the moment, without factory orders to help Bagania in his fight for the title with Quartararo and Aleix.

-Are you surprised that Ducati continues to give Basitianini a free pass at this point and does not impose factory orders to help Bagnaia? I like it that way, but it surprises me.

-It doesn’t surprise me, because I, as a lover of this sport, see that Enea Bastianini is 48 points away from the world title and I don’t see why she should play a team game. No. A team game is when you have no chance of winning the World Cup and there are still five races to go. It is normal for Ducati to act like this and even more so when it comes to Enea, who is a rider who wants to win. If then the math tells you that you have no chance of winning, then anything is possible. But be careful, because a third place for Enea in the World Championship (now he is fourth) affects the bonus in the contract with Ducati, with Alpinestars, with Kyt and with other sponsors. That has a monetary value and here we are professionals. It’s important to come have fun, but money is money.

-What would happen if Ducati asks its rider, even with mathematical chances of winning the title, to help Bagnaia wherever he is?

-As long as Enea has mathematical chances of winning the title, she will win whenever she can. Ducati can say what she likes to be done, but we run with the Ducati contract this year, but in the Gresini team, which she pays for the bikes. Today I can assure you that here and in Thailand, if Enea can win, he wins. We will also have to see what happens here, because a zero would change everything. On the contrary, if the math gives him realistic odds, he will go on to win.

-Did you imagine that Bastianini could reach this stage of the championship as he has done, with four victories to his credit, 48 points behind the leader and being chosen by Ducati for the official box next year?

-I have always believed in Bastianini, because I took him four years ago, but I didn’t think he could win four races this year. One or two, possible, but not four. And that he goes like this in the classification is not that it surprises me, but he has done it very fast because he is in his second year. I am sure that he will be a rider who will always opt to win the World Championship.

-And the last one I want you to answer as a racing man, not as a representative of The Beast. Who will win this exciting World Cup?

-Today I put my money in a bet for Bagnaia. I do it for two reasons. He has grown a lot, he is strong. It reminds me a bit of Lorenzo and Biaggi, that when they ran away there was no one to catch them. And then because he rides a Ducati which is the best bike.

-Didn’t they opt for the 2021 engine in the official box?

-Pecco and Miller have a slightly better bike than Enea’s, especially in the engine section. Enea has the 21 engine and they have the 22 engine. At the beginning of the season it was better to take the 2021 bike and if Ducati touches my balls (it is a gesture in Italy to prevent bad luck), it will lose this World Cup it will be for its first four races, in which Bagnaia hardly made any points, and not because of Enea’s five points in Aragón.

Maverick according to Maverick – Sport-Journal
MotoGP 2021: The 2022 MotoE World Championship of double events
How will the motorcycles from Aragon arrive in Japan?
MOTOGP 1019