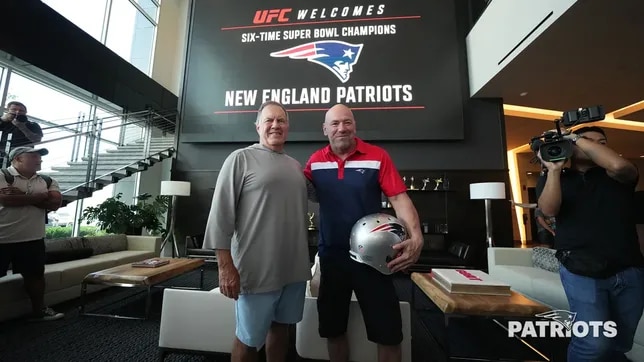 The Patriots are set to face their final preseason game against the Las Vegas Raiders, and received a surprise visitor during their stay in Sin Cit

The Patriots are set to face their final preseason game against the Las Vegas Raiders, and received a surprise visitor during their stay in Sin City. Dana White, president of the UFC visited the New Englanders in training.

White, who was a great fan of the New England Patriots and Tom Brady, but with the arrival of the Raiders in Las Vegas had to change, achieved something that few can achieve, he made coach Bill Belichick smile.

The UFC president decided to visit the training camp and presented the Patriots head coach with a UFC championship belt, making him smile as he put it on.

Las Vegas is the capital of mixed martial arts and boxing. The vast majority of fights take place precisely in the city of the state of Nevada.

YOU MAY ALSO BE INTERESTED: The NFL players with the most guaranteed money in their contracts

“It’s a great opportunity, not having to go elsewhere. I mean we are in one place. They enjoy spending time together, doing things together, football or something else. So, it’s a good opportunity. It sets us up for the games we’re going to have on the road this year,” Bill Belichick said of the practices together.

The team, coaches and support staff traveled to the UFC headquarters and took a tour of the facility and gained insight into the life of a mixed martial arts athlete.

The Patriots will face the Las Vegas Raiders this Friday, August 26, in what will be their last preseason game, before meeting the Miami Dolphins in week 1 of the regular season on September 11.

Muhammad asks for a pass: defeat Luque at UFC Las Vegas 51
UFC: Paul Felder. “It takes a strong fighter to beat Usman”
Khalil Rountree Jr. Opens Up About Turning His Life Around After Getting Into MMA
UFC/MMA 1202