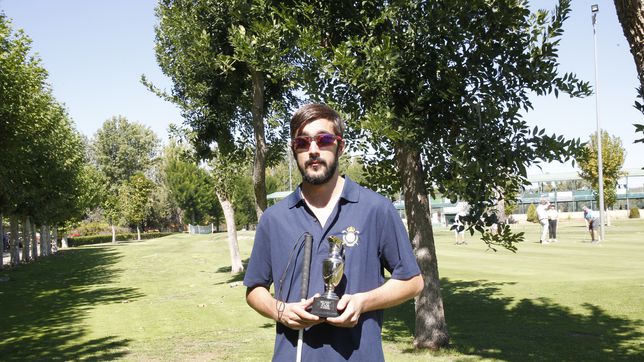 Guided by his inseparable cane, Alejandro de Miguel arrives at the headquarters of the Madrid Golf Federation, where the Daikin Madrid Open is pres

Guided by his inseparable cane, Alejandro de Miguel arrives at the headquarters of the Madrid Golf Federation, where the Daikin Madrid Open is presented, which was held from September 3 to 4. Born in Pamplona but from Madrid by adoption, Alejandro won a tournament that was a step forward for adapted golf, a form of this sport that the blind player explains without many complications. “It’s exactly the same. You can make pars, birdies or 14 strokes is a hole, that does not limit you when it comes to playing at a competitive level, ”he explains to AS.

At 30 years old, Alejandro de Miguel is a reference in Spanish adapted golf. This summer, he became the first man from Madrid to win the British Open. But his history goes back to past times. “I have congenital glaucoma, a degenerative disease that gradually damages the optic nerve. In my case, it was when I was 23 years old that I lost my sight at levels that were a problem”, he says matter-of-factly before recalling how he discovered this sport. “I started playing when I was little. I was wondering if I could play without seeing, I talked to the Federation and there was a visually impaired project that I joined, with more of an idea of ​​playing for entertainment. Searching, we discovered that there is an international circuit for people with visual disabilities, we talked to them and we joined in 2017, when we started traveling”.

💥Alejandro de Miguel will be the first Spaniard to participate in the ‘Ryder Cup’ for blind golfers.

⛳The tournament will be played at the spectacular TPC Sawgrass complex.

🏆After many triumphs this year, he tells us that he wants to put a very special icing on the cake.#GolfForAll pic.twitter.com/bPByg3AdwL

For those who have ever played golf, it is difficult to understand that you can play without one of the essential senses in this practice. “You rely on a guide, through him you interpret the field. You get to the tee, the guide places the ball, helps you put the club around it and tells you where to aim. From there, I hit. On the green, what we usually do is walk, because through the feet we get references. We also get acoustic information by hitting the flag a few times, so we know how far away we are”.

The victory at the British Open, where Alejandro remembers having made “108 strokes the first day and 112 the second”, confirmed the Spaniard as one of the best in the world in B1, the category for the totally blind (there is also B2 and B3). Although, as Alejandro comments, “in golf the handicap is the advantage, it is what makes you equal with the rest and allows us to compete with each other”. The prize for his great work is that he is already preparing his trip to the United States, where he will be the first Spaniard to participate in the Ryder Cup for the blind at the emblematic TPC Sawgrass. Unlimited overcoming.