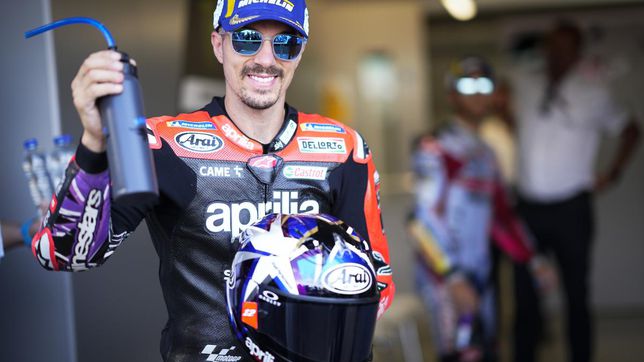 He has no doubts. After a second podium finish at Silverstone, he knows victory is closer than ever. And that ambition remains his strong point.

He has no doubts. After a second podium finish at Silverstone, he knows victory is closer than ever. And that ambition remains his strong point. Even after experiencing his worst moments in sports. Maverick Viñales has been reinforced and, since his departure from Yamaha just a year ago, the leap in quality has been evident. He trusted in a project that he was still taking off and, from minute one, he found in Aprilia the family he needed in the paddock. Committed and focused on a common goal: to reach the top. Aleix Espargaró has already achieved it, but Roses has little left to get there.

And he himself blindly trusts that the moment will come sooner or later: “Victory is the real goal. Is near. I don’t know how long it will take. The mentality of the team is correct (…) We are going to win, I know, I am going to be at the front, fighting, but it is a process. More time or less time, I don’t know. But the way I’ve been training and the way I feel, I see myself capable of getting victories and trying to fight for the title”. Because the Noale brand already has the keys to reach the top and Viñales never had any doubt about it: “I felt the potential in Aprilia from day one. There is still a lot of room for improvement, both on my side and at the factory. In the end, we are used to brands that have won a lot and know how to do it, and Aprilia has always won a lot in previous categories, but now that it is winning in MotoGP, they are going to go up”.

In fact, the Catalan already has an appointment on the calendar in mind where he would like to reach the maximum: Austria. That layout where just a year ago, the controversy exploded. Viñales was left without competing after the sanction imposed by Yamaha and, shortly after, his departure from the factory in the middle of the season was known. Maverick was left without a bike, until Aprilia crossed his path, also at Aleix’s insistence. Although, that is not the compelling reason why he wants a victory at the Red Bull Ring: “Winning in Austria, that would be a dream for me. It would be a goal accomplished after many hours of work and suffering. I have a pending account with that circuit because I have always been strong, but I have never achieved a good result. It is one of the circuits where I want to be at the front. I see the calendar and I’m already looking forward to it”.

But if there is something that makes Viñales feel more comfortable than ever, he himself points out that it is his team. He has found the support he needed and, apart from a work environment, Aprilia has also become his family. Of course, with the permission of ‘Il Capitano’, Aleix Espargaró, captain of this boat that already triumphs in MotoGP. He is also responsible for Maverick’s arrival at the brand and his good relationship makes the whole weekend go smoothly. “We prepare very well for the races. In several circuits we have had good results thanks to going together. (…) And so the two of us are growing super fast. That is the mentality and I think it is the secret of our team. We work as one. We know that the objective is to try to make Aprilia champion, ”explains the former Yamaha to DAZN.

“The relationship that exists in Aprilia is always one of great trust between all the members of the team. And with Aleix everything has always been very easy, we have always had a very special complicity, from 2015 to now. And it will be like that, because apart from racing a motorcycle, which we adore, we fit together a lot. That’s something special, because having a strong teammate like Aleix and, above all, when we fight he stays on the track, it’s fun. I always remember many races, that we both went ‘to sack’, and when we took off our helmets we laughed a lot. And that hasn’t happened to me with anyone else”, confesses the Spaniard, who also applauds his teammate’s season: “Both Aleix and Aprilia are having a spectacular championship. They are not leaving anything, they are giving everything and we can play a good team, I am sure. Above all, more than perhaps winning a race or being in the front, it shows in practice”.

Changes to Red Bull Ring for MotoGP events
MotoGP: Improvements to the Mandalika circuit before the Grand Prix
MotoGP – Qatar GP 2022: “Acosta can win in Qatar and the Moto2 World Championship”
MOTOGP 791