Bono, in the spotlight of European football 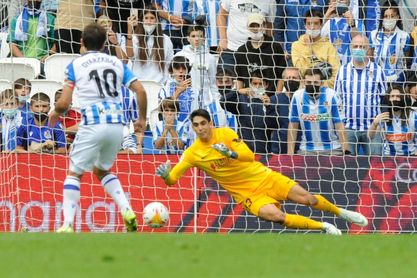 If there is someone Lopetegui is missing a lot this January, it is Yassine Bono. The Moroccan international goalkeeper Sevilla F.C. left with his

If there is someone Lopetegui is missing a lot this January, it is Yassine Bono. The Moroccan international goalkeeper Sevilla F.C. left with his team to play the African Cup after the game in Cádiz and, although he left the goal well covered by Dmitrović, his absence in the derby and against Valencia meant that the Sevilla coach had to pull Alfonso Pastor and of Javier Diaz for these two important shocks.

With Celta there are already five games played since the Moroccan left, in which Sevilla have conceded four goals. In the first two, before Zagaroza and Getafe, Lopetegui’s team managed to maintain the same efficiency back as we are used to, but everything went wrong in the derby, now without Dmitrovic, where Alfonso Pastor conceded two goals. Then, against Valencia, Javi Díaz was unable to stop Guedes’s header; and against Celta, Cervi and Aspas beat the Serbian goalkeeper, who returned to goal.

The average number of goals increased compared to previous games. Although not everything is attributable to the goal, since in these games, both Lopetegui and Pablo Sanz have had to make many changes in defense due to casualties. Especially the one from Koundé, who even got injured in the derby warm-up against Betis.

Despite everything, no one is fooled that Bono’s absence has also had an influence. The Sevilla goalkeeper, according to data provided by @LaLigaenDirecto, is right now the goalkeeper who concedes the fewest goals in the five major leagues, with an average of 0.59 goals per match. In LaLiga, Unai Simón, Remiro and Rulli follow him from afar.

Logically, with Diego Carlos, Fernando, Koundé… ahead and with a style of play in which Sevilla usually dominate the games, it is logical that little fits, but it is that it also stops 80% of the throws it receives, a statistic in which he is also in the lead.

Bono’s expected return will depend on what Morocco does this week, where Malawi awaits him tomorrow and, if he wins, he should face Egypt or Ivory Coast in the African Cup quarter-finals this weekend. If they fall in one of these two games, both he and Munir and En-Nesiry would be under Lopetegui’s orders from Monday. If they go to the semi-finals, it would already be a safe drop for the next League match, against Osasuna.

The Sevilla goalkeeper has won the respect for european football, where he is already recognized as one of the best goalkeepers in the world.

Tags: Soccer, news, DE
Ferdinand: “We have witnessed unreal football in this semi-final”
Football is not in the feet, but in the head
The Algarve Moto GP Grand Prix will have a capacity of 67,500 people
FOOTBALL 2373