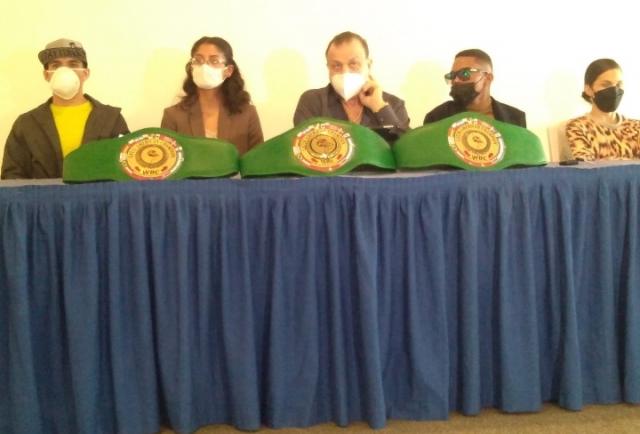 The evening includes the stellar fight between the Panamanian Jaime Arbole

The evening includes the stellar fight between the Panamanian Jaime Arboleda and the Dominican Nicolás Polanco, in dispute of the Latin Silver Lightweight title of the WBC

The boxing companies Best Box and Sampson Boxing will present another international day, with the participation of púgiles from the patio and from a variety of nations, being the first primer of this season, which will take place this Friday, January 14 , whose setting will be the Vasco Núñez de Balboa Convention Center, at the Panama Hotel.

This megacartilla, called ‘Box & Roll’, involves seven fights, where they will say present boxers of great trajectory, undefeated, several prospects and the liked female boxing, with the dispute of three Latin championships of the WBC

The day, which is awaited by the fans who love boxing, presents as a stellar fight the clash between the Panamanian Jaime ‘Jaimito’ Arboleda Iván vs the Dominican Nicolás Polanco, a lawsuit in which the agreed WBC Silver Latin Light Championship will be put into play to ten rounds, at a minimum weight of 132 pounds.

The local boxer, seventh in the WBA rankings, has a record of 17 wins, two losses, with 14 wins by knockouts, while the visitor has won 20 fights, a setback and a draw, adding 11 Kos.

“I’m just waiting for the 14th and doing my job above the ring, the adjustments we had to make we have already done, and we are going to make a great presentation to our rival,” said Arboleda.

The organizers of the card have inserted an international clash into the co-feature fight, with boxers with enviable records. They are the Argentine Hugo Alberto Roldán, and the Colombian Germán Del Castillo Muñoz Miguel Ángel Martínez.

The first of them remains unbeatable in 20 confrontations, (7 Kos), while his opponent has 10 wins, a single backhand and two draws.

Both gladiators will go out in search of the WBC Latin Superlight Silver Championship, a fight that is set at 10 episodes and weighs 140 pounds.

Another fight that has drawn powerfully attention is the one between Colonel Ernesto ‘The Problem’ Marín vs. Colombian Carlos Suarez, who will cross shrapnel in a six-round clash at 135 pounds.

The fans will also be able to delight in a fight where female boxing will intervene. Natalie Delgado, from Panama, is involved in it, who will be seen against the North American Gabriela Diana Fundora, both eager to be owners of the Women’s Latin Fly Championship, WBC

For this competition, set at eight rounds at 112 pounds, the experienced boxer Delgado has record scores of eight wins, four losses and a draw, while the lesser Fundora is unbeaten in four bouts.

Three preliminary matches make up the function, where we will see the Creole Abdiel Matute in action against the Nicaraguan boxer David Bejarano, heavyweights; Alcibiades Ballesteros vs Ricardo Rodríguez, 147 pounds and Jordán Salas will welcome his rival Pedro Muñoz López into professional boxing, a shortlist of caps set at four rounds.

Carlos González, who is an active part of the organization of this evening, said that it will be carried out with a capacity of 60 percent, according to the mandate of the Minsa, adding that a total of five billboards of boxing.