Boxer, disoriented, throws punches into the air and the fight is stopped 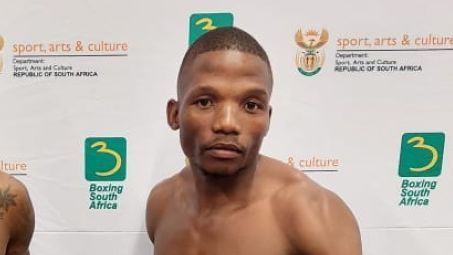 After sending his rival to the canvas, Simiso Buthelezi went to the other end of the ring and continued fighting without having anyone in front of

After sending his rival to the canvas, Simiso Buthelezi went to the other end of the ring and continued fighting without having anyone in front of him.

Boxing experienced dramatic moments this Sunday in Durban, South Africa, when Simiso Buthelezi, disoriented, ended up throwing punches into the air in the ring after sending his rival Siphesihle Mntungwa to the canvas.

In his fight for the vacant African Lightweight title endorsed by the World Boxing Federation, Buthelezi seemed headed for victory after dominating his rival and in the tenth round he landed a combination that cornered Mntungwa against the ropes and eventually left him. hanging from the ropes, in his attempt not to fall out of the ring.

Very scary in South Africa please 🙏🏼 for Simiso Buthelezi (4-1). At 2:43 of the 10th & final round, Siphesihle Mntungwa (7-1-2) falls through the ropes but then Buthelezi appears to lose his understanding of the present situation. Mntungwa takes the WBF African lightweight title pic.twitter.com/YhfCI623LB

As the referee walked over to check on Mntungwa and clean his gloves, albeit without applying a protection count, Buthelezi backed into the center of the ring, then spun to one of the corners and began throwing punches into the air, forcing the referee to stop the fight. Fight.

Mntungwa began to celebrate his unexpected triumph as the referee held Buthelezi and the fighter’s corner entered the ring to attend to him.

Shortly after, Buthelezi was removed from the ring for immediate medical care, as the World Boxing Federation decided to postpone the ceremony for the delivery of the belt to Mntungwa.

Simiso Buthelezi ended up throwing punches in the air after his fight against Siphesihle Mntungwa resumed. World Boxing Federation

Tags: boxing
Boxing: Naoya Inoue, the monster of the rising sun
“There is Canelo for everyone” | BRAND Usa
Boxing: The scandalous offer for Canelo to face Bivol and Golovkin
BOXING 3110