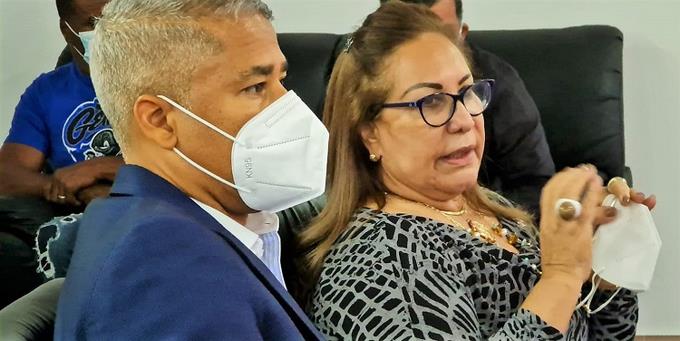 The president of the XL International Boxing Independence Cup, engineer Andrés Cueto, general director of EDENORTE, and the genera

The president of the XL International Boxing Independence Cup, engineer Andrés Cueto, general director of EDENORTE, and the general director, Ms. Rosa Santos, provincial governor, announced the roofing of the Pueblo Nuevo club, as the venue for the competition, as well as the choices of on Thursdays and the confirmations with their respective lists of Ecuador and Panama, among the participating countries.

In addition, speaking on behalf of the Organizing Committee, at a work meeting held last Wednesday at EDENORTE, Engineer Cueto and Ms. Santos were happy with the updated course of the previously established critical path, congratulating the commissions for the work they do in each line.

At the same time, they announced the roof of the Pueblo Nuevo club, as the venue for the competition, thanking the management of that entity for the gesture, as well as the fact that the Posada Plaza Monumental hotel is the villa for the accommodation of the participating delegations.

While, they also announced the components of the Panamanian delegation, which features five athletes and three delegates, being the boxers, in 52 kilograms (Kg), Yuliett Hinestroza; in 48Kg, Miguel Bernal; in 60Kg, Moises Rodriguez; in 67Kg, Alejandro Díaz and in 75Kg, Aldair Salazar; team leader, Edwin Marquínez; Yuliana Torres and José Perigault are the coaches.

Similarly, they offered details about the Ecuadorian delegation, which has a large selection of eleven (11) boxers, six (6) male and five (5) female, plus three (3) coaches and a chief delegate.

Different from other occasions, both characters indicated that the president of the Dominican Boxing Federation, Mr. Rubén García, informed them that the technical director is Mr. Juan Alberto Rodríguez, then they added that, according to the list of judges sent by the general director of The same is the international Carmen Vélez, they then reported on those choices.

In addition to Rodríguez and Vélez, the list of Dominican judges is made up of Máximo Cordero, Luís Hernández, Ana Martínez, Daniel Rodríguez, Emiliano Guzmán Bidó, Darío Rosario, Yordany Fabián, Juan Carlos Reyna and Miguel Rodríguez, as well as others from the international federations. .

Finally, starting the work meeting, Mr. Ariel Acosta, president of the Santiago Boxing Association, host of the event, congratulated the Organizing Committee and the work commissions for the work they carry out and for maintaining the critical path in excellence, citing for the next meeting.