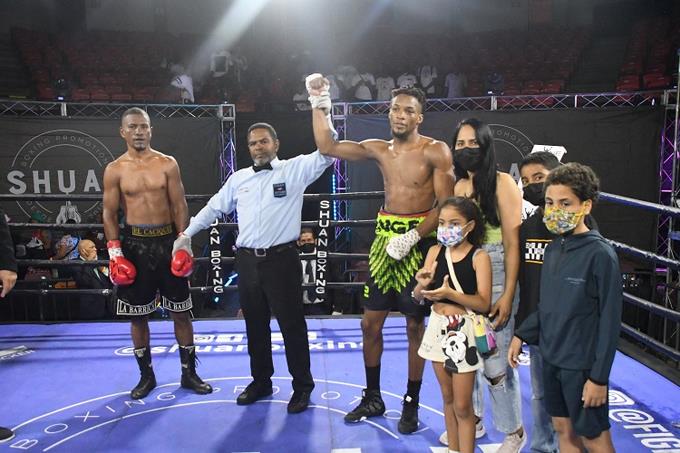 Dominican prospect Ángel Cruz managed to add another victory to his short, but ascending career as a professional boxer, after bea

Dominican prospect Ángel Cruz managed to add another victory to his short, but ascending career as a professional boxer, after beating Venezuelan Jean Carlos Prado by knockout in the same first round in the main fight of a card held at the Carlos’ Teo ‘Cruz, organized by Shuan Boxing Promotions company.

On the same evening, Leonel de los Santos, who comes from representing the Dominican Republic in the Tokyo 2020 Olympic Games, added the fourth knockout in a row in the professional field, after having his compatriot Jonathan Mariano on the fast track.

In the semi-stellar combat, the also Dominican Frency Fortunato, grandson of the former outstanding professional boxer Leopoldo &#8216;El Gallito&#8217; Frías, had a night to celebrate, after defeating the dangerous Venezuelan Cristian Avila by knockout.

The event included a total of 14 fights, with the participation of boxers from the United States, Cuba, Venezuela and the Dominican Republic.

The triumph of the Dominican Cruz came in the same first round of a fight that had been agreed to eight rounds at the conventional weight of 150 pounds.

With the victory, the pupil of the Shuan Boxing company, organized of the event, improved his record by 5-0. All of his victories have been on the fast track.

In his previous bout, Cruz surprised boxing fans after winning a knockout knockout of the experienced Julio De Jesús.

On this occasion, his victim was the Venezuelan Prada, who did not even have time to decipher the style of the Dominican, who since the bell rang, announcing the start of the lawsuit, he launched himself on top of his rival, managing to connect with power his blows in the anatomy of the Venezuelan fighter.

Quickly, the referee intervened for a first protection count and then he was forced to stop the fight and declare the boxer from the Dominican Republic the winner.

On his side, Leonel de los Santos, who combines his career as an Olympic boxer with that of a professional, ordered his compatriot Jonathan in the third round.

De los Santos remains undefeated, now at 4-0, all his victories by way of knockout.

Because the regulations allow him, De los Santos intends to continue in professional boxing and represent the Dominican Republic at the Olympic level.