Boxing: Eleven titles from the world and nineteen from Europe will meet at Sigs 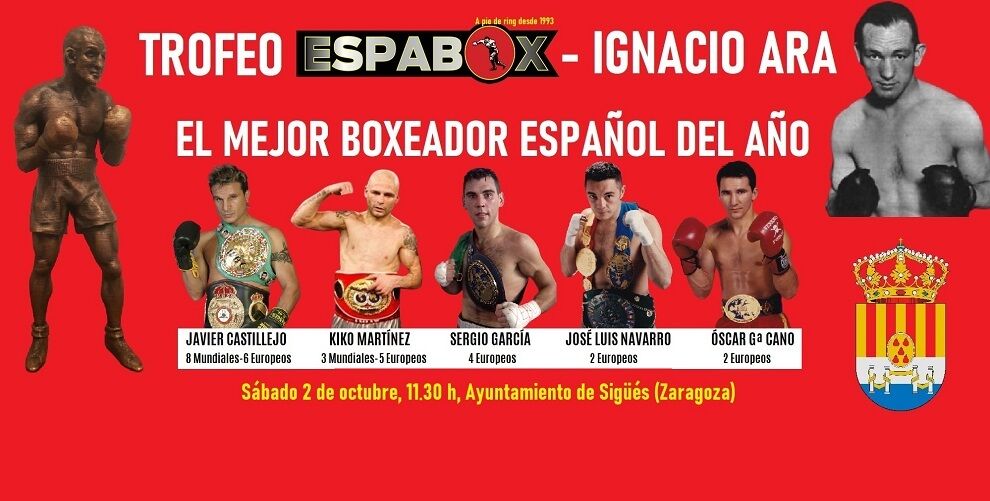 ANDhe next Saturday, October 2 In the Zaragoza town of Sigs, five great Spanish pgiles will meet, accumulating in their palm no less than eleven wo

ANDhe next Saturday, October 2 In the Zaragoza town of Sigs, five great Spanish pgiles will meet, accumulating in their palm no less than eleven world titles and nineteen European titles.

Every year since 1994, the only periodical on boxing in Spain, ESPABOX, and at the same time the specialized web ESPABOX.com, names, with the collaboration of other media, the BEST SPANISH BOXER OF THE YEAR.

During the first few years, ESPABOX gave a commemorative trophy to the winners, but the idea has always been to create a statuette with the image of a legendary Spanish pgil. In 1998 the ESPABOX Guide asked veteran journalists and people of the boxing world with long experience who, in their opinion, had been the best Spanish boxer of the 20th century. And the one that obtained the most points in the survey was the aragons IGNACIO ARA, ahead of the Basque Paulino Uzcudun and the Spanish-Cuban Jos Legr. Some illustrious commentators such as Manuel Alcntara, Xabier Azpitarte, Jos Luis Garci or Elio Guzmn, among others, voted Ignacio Ara as the best.

Therefore, it was agreed to name this recognition as ESPABOX-IGNACIO ARA TROPHY And since last year we have wanted to give him the honor of putting his name and image on the trophy, which has a height of about 30 cm and a weight of about 400 grams.

In 2020, ESPABOX together with the Hon. Sigs Town Hall, the birthplace of Ignacio Ara where there is a museum in his honor, began to retroactively deliver the statuette representing this award. On September 12 of last year, another five of the great fighters of recent times came to collect their trophy, who were recognized as the best Spanish boxer of the year, Abigail medina (2017), Juli Giner (2015), Gabriel Campillo (2008, 2009 and 2010), Karim Quibir (2004) and Jorge Sendra (2003).

Ignacio Ara He was a pgil born in 1909 in Sigs (Zaragoza), twelve times champion of Spain of the middleweight and three times of the light heavyweight between 1942 and 1947, European middleweight champion in 1932, the only Spaniard who has achieved it to date, disputed the world title twice of the middleweight, he made more than 200 professional fights, the most in Spanish history, and he never lost by KO fighting against the best world fighters of his weight in different countries of the world. He traveled through many American countries where he achieved dozens of important triumphs. His technical quality, his intelligence, his quick movements, his punch, his complete boxing, earned him the nickname of “The Professor of the twelve strings”.

Soon it will also be delivered to the Best Spanish Boxers of each year of the ESPABOX-MARA JESS ROSA TROPHY, in honor of the recently deceased world champion.

Tags: sports Center, boxing
Boxing: From Mayweather to Bivol: Canelo’s second redemption
Boxing: Spain achieves a historic poker of finalists in the European Championship
Floyd Mayweather is the boxer who made the most money in the history of this sport
BOXING 4243