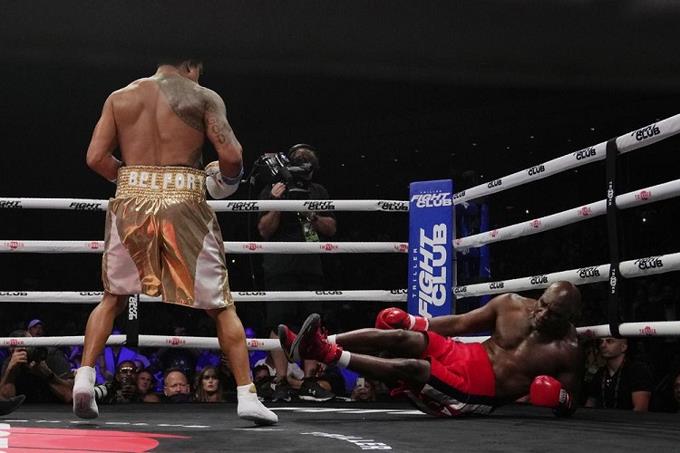 If you don't think the only thing that matters in boxing is making money, look at what happened over the weekend with Evander Holy

If you don’t think the only thing that matters in boxing is making money, look at what happened over the weekend with Evander Holyfield.

The former heavyweight champion risked his life by stepping into a ring at 58 to win a few pesos. He starred in a charade that people paid for that would have hurt boxing a lot if it weren’t for the fact that the sport is already heavily tainted.

Triller Fight Club promoters obtained a license for Holyfield to fight in Florida and moved there, at the last minute, an evening originally scheduled in California, after an Oscar de la Hoya fight was called off because he said he had contracted COVID -19.

Holyfield offered no apology after losing by TKO in the first round to a former MMA fighter after landing just one hit. He apparently lives out of reality, as after the match he said that he now wanted to fight Mike Tyson.

Who did apologize is a judge who admitted to being wrong.

Best of all, he did it on his own. It was an apology that came out of nowhere, like a good left hook.

Stephen Blea was one of three judges in Friday’s match in Tucson between Oscar Valdez and Robson Conceicao for a junior lightweight title. It was nothing new for Blea, who officiated in more than 60 title fights around the world.

That night, in front of a packed stadium, the public was loudly cheering on local credit, Valdez. Blea, on the other hand, had to deal with photographers and videographers who hindered her work.

“Honestly, I thought I could judge the fight, I have no excuses,” he said.

Perhaps the enthusiasm of the crowd caused Blea to give Valdez a few rounds that could either have been tied or were won by Conceicao.

Social networks were filled with criticism of the judge, who after seeing a recording of the fight admitted that he was wrong. That the margin of victory should have been 115-112 or even 114-113.

Blea offered an apology that is unprecedented.

Bad bugs abound, but no one ever apologized for them.

This Arizona judge did.

“The 117-110 card is not appropriate, it does not reflect what happened in the ring. I feel like I failed my federation (the NABF), my organization (the WBC), and above all, our sport and the fighters who stepped into the ring, ”wrote Blea.

Hopefully the people of Triller are paying attention, because they too should apologize. Bringing an individual four years out of retirement age into the ring at the last minute didn’t just make an already-bad-looking sport look bad. He also endangered a man’s life for financial reasons alone.

It’s hard to watch the video of the fight. The boxer who beat up Tyson a quarter of a century ago looked slow and confused.

Sadder still, Holyfield, who made $ 35 million in 1997 for his second match with Tyson, was so desperate for money that he thought he could get back in the ring.

Contrast this with the attitude of Blea, who is so mortified by his mistake that he plans to take a few courses before going back to ringside.

“I am an honorable person who loves and respects sport,” he said. “I’m sorry I had a bad night and generated unnecessary controversy after a sensational fight.”

A sincere apology. In boxing, neither more nor less.