“Boxing has changed my life, it has given me a lot of strength and peace” 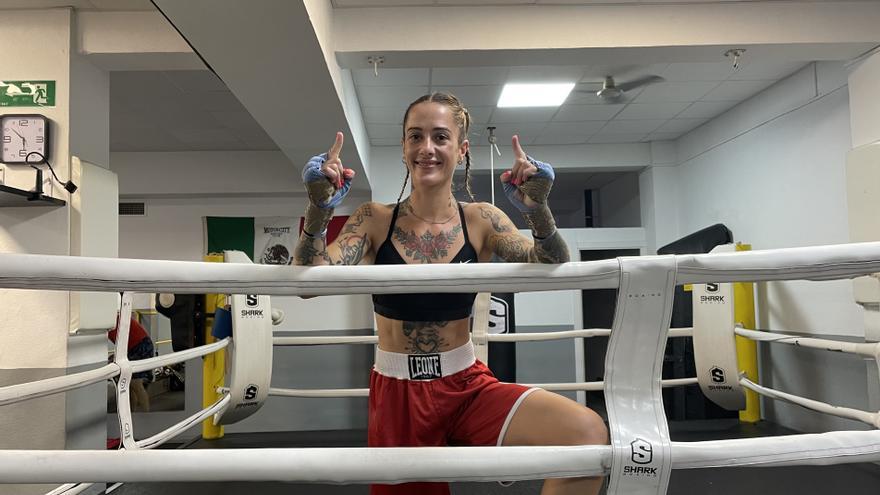 The Aragonese boxer Cristina Navarrocoming from the gym Motorcity Boxing Clubdebuts this Saturday at 8:00 p.m. in the 'II Inca Bo

The Aragonese boxer Cristina Navarrocoming from the gym Motorcity Boxing Clubdebuts this Saturday at 8:00 p.m. in the ‘II Inca Boxing Night 2022‘ to be held at the Mateu Cañellas municipal sports center. Navarro, who comes from winning the gold medal in the Spanish Championship in Women’s Elite -48 kilos, she will fight in her first fight as a professional against the woman from Valladolid Elizabeth Rivero, who accumulates a good background in the amateur field and has a victory in his only fight as a professional. The fight will be the prelude to the strong fight of the evening: Aritz pardal “El Chulito” against Jon Martínez “El Tornado”.

On Saturday he faces his first fight as a professional. How does he feel?

First fight, debut as a professional. You have to be in your best condition and I just think that’s the case. I’ve come very well from the Spanish Championships and other fights, and I think I’m at the best point of preparation, without injuries and with a long and well thought-out preparation.

He comes from winning the Spanish Championship -48kg. How was the experience of being able to hang a gold medal?

Very nice. In the end, for me, who recently started in boxing, it was the main objective that I had. Going to a European or Olympic boxing World Cup is more difficult, because there is a Spanish National Team that is already organized and let’s say that when one wants to follow a professional path, the objective is always to be Champion of Spain and become a professional. It has been super nice because I used to watch the Spanish Championships and it seemed like a dream to me, until participating.

Did you fight representing Aragón?

Yes, it is true that I have been in Mallorca for five years, but I had a very good relationship with the Aragonese Federation. They were missing a 48kg and had a fairly complete team of boxers. We have a very good relationship and speaking with the Balearic Federation I told them that I would like to thank them for their commitment to me (to Aragón) and that I would like to say goodbye to the amateur world with them.

How important is David Quiñonero, your coach, in your day to day and your preparation?

Fundamental. I always say it and David and I don’t always laugh much, but when I walked in the door I was like a boxer’s horror. He didn’t know how to do anything, it was ugly to see. He took me out to fight and he already told me that he had a lot of balls and a lot of courage, that everything else is learned. There has been a job behind him to make me from scratch and mine to make an effort and go correcting and boxing well. When you can trust your coach 100% and it works, that’s a gem and luck.

How do you assess the evolution of women’s boxing in recent times?

Now finally, from a little time ago to here things are evolving. At an amateur level, the Spanish National Team is already beginning to gain weight and at a professional level there is now a wave of girls who are turning professional and who are having European titles, Mari Romero is there to play in the World Cup, etc. We are at a very important level.

Farah El Boussari is a benchmark in Balearic boxing. What does it mean to you?

She was the first at the Balearic level, and I will be the second. I remember when I was going to debut as an amateur and I saw her who was already a professional, and I said, Oh my goodness, this girl! It is true that Farah is a wonder and he is going to give a lot to talk about. He is very talented and my evolution is thanks to her and David, since we have trained together at the foot of the canyon and it has made me grow a lot.

What can we expect from you the night of the evening?

You are going to see a bully. There is a lot of desire behind, a lot of preparation and a good rival. There will be a little war, it will be very cool. I encourage people to come because it is very exciting. It will be a good debut, that they bring you a girl who has already debuted and who has a very nice boxing and a positive record is good.

How do you see the panorama of Balearic boxing today?

I see it very well. I think we have that handicap of being outside the peninsula, since the peninsulars roll more in terms of evenings and combats, since they can move around Spain, but many evenings are beginning to be held here. About 12/14 evenings a year are being held, something that is not done in any community. At a professional level, many sponsors are turning their attention and that is also necessary since putting on an evening is very expensive. It is important that these sponsorships exist and that they can fight and bring other rivals.

How did you get started in the world of boxing?

I liked boxing a lot since I was little. In my house boxing was practically not seen and I was very attracted by the aesthetics, the boxing movies. But with the idea that boxing had that old image, well, I never dared to go to a boxing gym. My mother never left me when I was little either. She was a thorn in my side, until one day a trainer from a normal gym told me “Come on in, let’s try it!” I got excited and went in and from there I realized that it was really a sport.

What does boxing mean to you?

Boxing for me is much more about the head than the body. You cannot get into the ring with insecurities, with fear. You have to overcome many things and since boxing has really changed my life. Life, thoughts, positivity, negativity, how to deal with any conflict; It has given me a lot of strength and a lot of peace.

Tags: Navarrese, Life, changed
Mike Tyson confessed what his biggest and toughest fights were
Unusual: Boxer from Catamarca was disqualified and out of anger he stole the belt
The best knockouts in boxing in 2021
BOXING 3637

Loading...
Newer Post
Reliability problems for Red Bull and Ferrari: how did Mercedes behave during its hegemony in Formula 1?
Older Post
Spain has the first sustainable soccer city