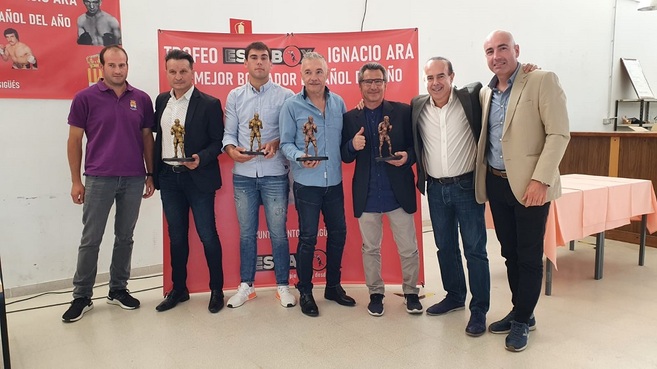 ANDLast Saturday the awards ceremony was held for the second consecutive year in Sigüés (Zaragoza) ESPABOX-IGNACIO ARA, in memory of the legendary

ANDLast Saturday the awards ceremony was held for the second consecutive year in Sigüés (Zaragoza) ESPABOX-IGNACIO ARA, in memory of the legendary Aragonese boxer born in the town.

Memorable Spanish fighters and a large audience attended the delivery of this award, which the Espabox website, with its vote and that of other media, recognizes the considered best boxer of the year. It has been collected retroactively by several fighters with excellent track records. The event was chaired by the mayor of the town of Sigüés D. Eduardo Abadía and by the director of Espabox Emilio Marquiegui, commenting on the mayor they wish to be “every year the reference town of boxing.”

On this occasion, the double European lightweight champion and best fighter of the year 1997 collected his statuette. Oscar Garcia Cano, who recalled his exploits as a continental champion in two stages. The Zaragoza native lives in Masquefa (Barcelona).

Another double European champion, welterweight, the Cordoba Jose Luis Navarro, thanked the recognition and recalled anecdotes that led him to be the best of 1996. A fighter with a great punch who won all his bouts by KO.

Another active boxer with a great future is the four-time European super welterweight champion Sergio garcia. The Cantabrian from Torrelavega has been the best Spanish boxer of the last two years, 2019 and 2020 and has among his projects to fight for the world title in 2022.

And the fighter who has been recognized the most times as the best boxer of the year is Javier Castillejo, no less than eleven, between 1991 and 2007. The Madrilenian has been eight times world champion in two weights, super welterweight and a half and six times European super welterweight champion.

Multiple feats that were evoked at the gala. An excellent boxing environment, which was also attended by members of the Aragonese Federation. A great initiative to celebrate in this town that had an illustrious neighbor.

Tags: sports Center, boxing
Jake Paul, boxing’s undefeated youtuber | Other Sports 123
JJ.OO. | Boxing at risk of being left out of Los Angeles 2028
Boxing: Fury: “Anxiety is one of the worst things anyone could have”
BOXING 1364