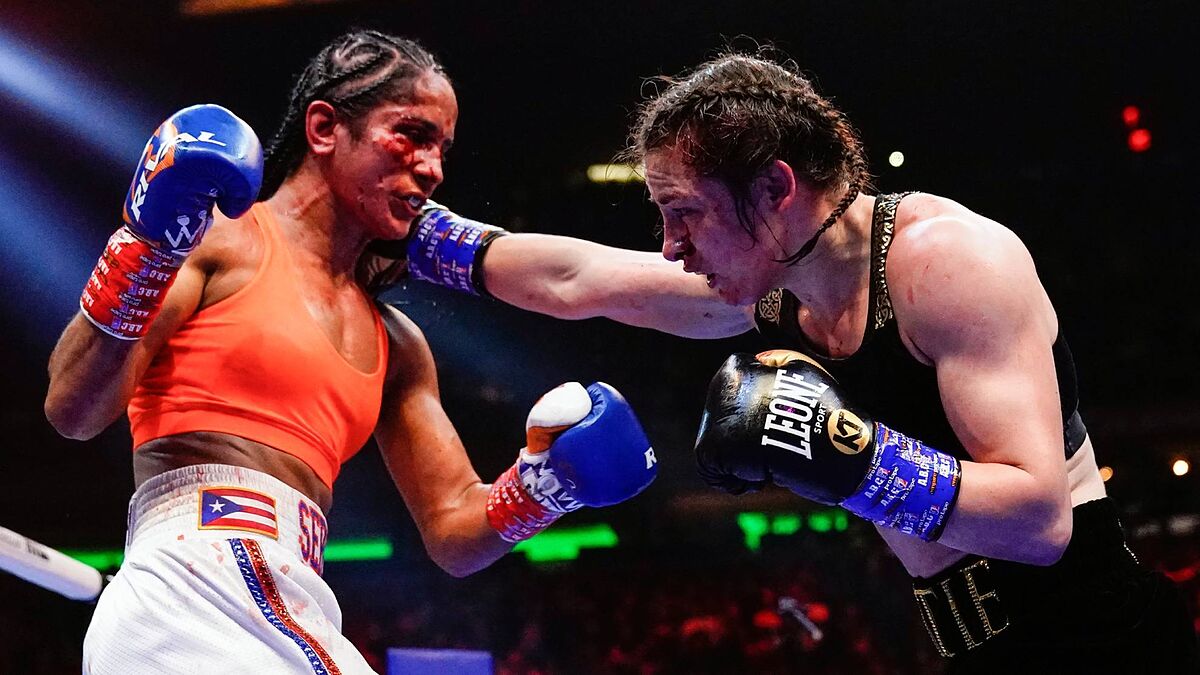 Katie Taylor (21-0, 6 KOs) defeated Amanda Serrano (42-2-1, 30 KOs) by split decision in a historic match both in sports and for what it meant for women’s boxing. The show of the two boxers lived up to expectations in a Madison Square Garden which for the first time had two women as headliners. With KT about to get knocked out in the fifth round, the Irishwoman won 96-93, 97-93 on two of the cards for a 96-94 on the other.

Taylor retained all four lightweight titles and remains the undisputed champion of the category. The duel had the cache of ‘fight of the century’ and the truth is that not only did it not disappoint, but had the spectators on their feet from the first to the last round. The decision of the judges was loaded with controversy, since Serrano dominated the first part of the fight and was about to finish his rival in the fifth round. Taylor came back from the final acts, although ‘The Real Deal’ did not deserve a defeat.

Already the first assault showed that the duel was going to be intense. No contention on the part of both female fighters and a couple of hard lefts that made the champion bleed right from the start. Serrano is the one who pushed, but his rival was fast and very effective in the early stages. The third round was high voltage with Taylor responding, though still fighting back. This pressure was more noticeable in the fourthor, with the Puerto Rican hurting the Irish more, that it lost steam.

In the fifth Taylor, I made a very serious mistakenot because he let himself be cornered, but because he entered an incessant exchange that he had lost in the corner. When she managed to get out she was almost knocked out. He received received a monumental punishment that extended to the center of the ring. The Irishwoman was dead after receiving a terrible barrage, but she proudly resisted until the assault was over.

In the sixth, KT showed signs of survival and incredibly offered war to ‘The Real Deal’, as in the next act. They both dealt heavy blows. The champion, in full revival, was contributing a lot of work until the end of the fight, trying to come back from the fight. Already in the last round both boxers came out to exchange ‘dynamite’ without further ado. Emotion until the last blow and the two were left standing. The result, debatable, which undoubtedly lends itself to a rematch.

“Tonight was without a doubt the best of my career”Taylor said. Serrano, far from showing her disagreement with the decision in the ring, requested a rematch, to which the champion responded affirmatively: “Although next time with two million dollars for each one,” she added. Serrano took the opportunity to vindicate what all the spectators were able to witness in the New York night: “Women can sell, women can fight and we offer a great show”pointed

Tags: sports Center, boxing
Floyd Mayweather Jr. returns as a titan to the ring at 45 years old
Montana Love and Filip Hrgovic join Canelo vs. Bivol undercard
“Canelo vs Golovkin is a boring fight that nobody wants to see”
BOXING 3165

Loading...
Newer Post
NBA PlayOffs 2022: And that’s how Curry stopped talking to Klay Thompson, he ruined the basket of the year!
Older Post
Winners of the futsal Champions League: who has the most and how many titles each team has