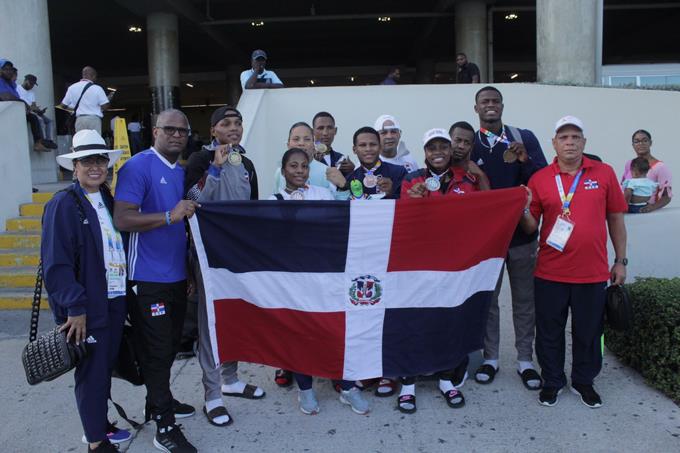 The Dominican boxing team has achieved great results in recent multi-sport events in which it has participated, and the current Bo

The Dominican boxing team has achieved great results in recent multi-sport events in which it has participated, and the current Bolivarian Games held in Colombia are no exception.

The boxers achieved a total of seven medals in Valledupar 22, including three gold, two silver and two bronze.

Some of the representatives of this sport have attributed the success of this team to the unity that the athletes have when they get into the ring to fight.

“When one of us is fighting, we are all fighting. In the federation we treat each other like brothers, if we lose the whole team loses the same as if we won”, said Alexy De La Cruz, winner of a gold medal in the lightweight of the Bolivarian fair.

This medal corresponds to the second gold metal in a row that De La Cruz obtains in a day of this type, as was the case of the Bolivarians that were held in 2017, in Santa Marta, Mexico.

Alexy, who is also one of the flag bearers of the Dominican delegation along with the karate fighter María Dimitrova, achieved this gold medal after defeating Colombian boxer José Manuel Viáfara by split decision.

“Representing my flag is always my greatest achievement. It doesn’t matter what medal he wins, the fact of wearing the national canvas is already a victory”, continued the boxer when he returned to the country last Friday afternoon.

The boxing team returned to Dominican soil through the Punta Cana international airport on a flight from Bogotá, Colombia.

In addition to Alexy De La Cruz, fighters Euri Cedeño also won medals, gold in the male middleweight category that ranges between 69-75 kilos; Cristian Javier Pimentel, gold in the light heavyweight (75 – 81 kilos), and Rodrigo Marte reached a bronze in the weight of 52 – 57 kilograms.

In the women’s division, María Moronta won silver after losing to Shirleidis Paola Orozco, from Colombia, in the final fight of the 64-69 kilos category, and in the same way, Miguelina Hernández, won silver after losing to Colombian Ingrit Valencia in the flyweight (48 – 51 kilograms), and Estefani Almánzar De León, achieved bronze in the featherweight (54 – 57 kilos).

Tags: news, daily list, information
THINGS OF GOD – God and football
GALA – MMA will celebrate this Friday the “The Commission” awards
BASKETBALL – Al Horford in the NBA Finals: Let him sit in the Dominican Republic!
BOXING 3627

Loading...
Newer Post
What is the Halo? The Formula 1 security element that saved Guanyu Zhou’s life
Older Post
Who are the drivers with the most races in the history of Formula 1? The complete list