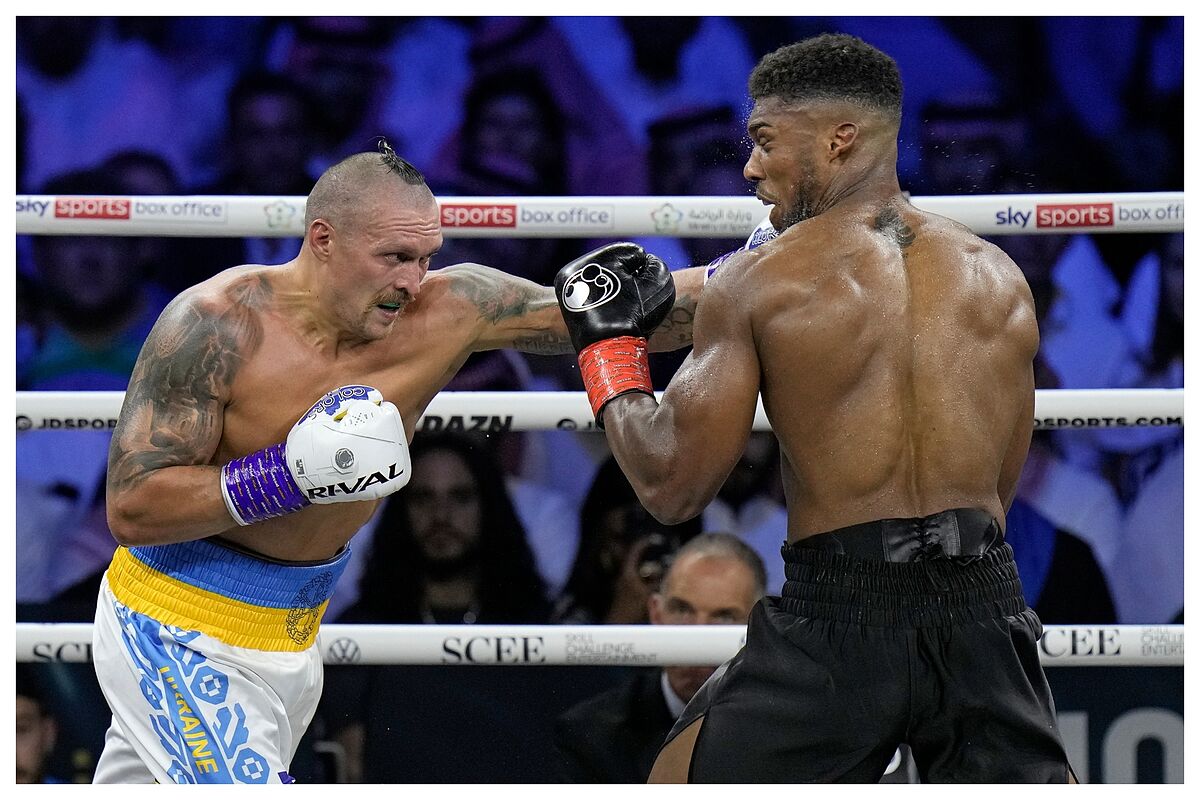 Oleksandr Usyk (20-0, 13 KOs) revalidated the three world heavyweight titles (WBA, WBO, IBF) that he had taken from Anthony Joshua (24-3, 22 KOs) last year, after defeating him in a rematch by split decision (116-112, 115-113 for Usyk and 115-113 for Joshua) in a fight that did not take off until its final stretch. The Ukrainian, who entered the ring wearing a shirt with the colors of his country’s flag and the motto ‘colors of freedom’ (the colors of freedom), was the fair winner of a contest that the champion only saw in danger in the ninth round, when AJ flirted with knocking him out.

in an extraordinary way, ‘The Cat’ returned in the tenth as if nothing had happened and even increased the pace of combat to give fans a worthy ending to a fight that until then had been very tactical, and in which the applicant woke up too late again. The future for the current monarch? “I am sure that Tyson Fury is not retired. I am convinced that he wants to fight me and I want to fight him.”. And if I don’t fight Tyson Fury, I won’t fight anyone,” Usyk said. Next week we’ll find out what happens to the title. World Boxing Council (WBC)an organization that has decided to give Tyson Fury, its owner, one last option to decide if he is still active and defends his belt.

Regarding the clash of Olympic champions, Joshua began the fight more calm than expected, but faithful to the plan he had outlined, while ‘The Cat’ evades his champion status. He was attacking and in constant movement to avoid a possible attack from his rival. Nothing new compared to the first match. AJ pulled strategy and began to draw hands. He went on to land a powerful right hand in the second act. The Englishman became the owner of the center of the ring and showed that he was much better prepared to defend against attacks from any angle of his opponent, although he had a hard time taking a step forward.

After six rounds, the duel was still open. Good defense by both fighters, although Joshua did not finish taking out his aggressive side, the one that should give him rounds. The champion reproduced the tactic that led him to success months before, changing angles at all times thanks to his prodigious legs. very hard to catch. If the one from Watford intends the KO, he did not seem so.

Halfway through the fight, an exchange of ‘dynamite’ had not yet occurred. The rival error was sought more. In the eighth round Joshua tried to move up a gear and worked his opponent’s body more. There began another fight in which the applicant finally risked. In the ninth, the British punished the heavyweight champion very hard and almost took the prize. However, the Ukrainian came out on top in the tenth. ‘The Cat’ brought out the best of his repertoire and a tenth round of constant exchange was experienced. Great recovery for Usyk. From there to the end, the fight continued to rise in intensity, but with an Oleksandr Usyk in champion mode to seal his victory.

Usyk had barely had time to enjoy the joys of success in the premier class. On February 22, he was happily at the Stanford Bridge stadium watching the Champions League match between Chelsea and Lille, taking advantage of the fact that he was in London to close the second duel against AJ. Two days later he was heading to kyiv to join the army of his country.

At the end of March, the Ukrainian Sports Minister granted permission to cross the border with Poland to Usyk and in this way be able to prepare for this revenge match against the former British champion. Volodmir Zelensky’s cabinet was very clear that the figure of the world heavyweight champion would be more useful to the cause in the ring.

Oleksandr has thus managed not only to retain the three titles he had previously taken from Joshua, but also keep intact his dream of emulating Evander Holyfield, who managed to be the undisputed champion of both the cruiserweight and heavyweight. This voyage began for ‘The Cat’ back in 2016, when he reigned for the first time on the cruise. He would proclaim himself absolute monarch of that category in 2018, when he defeated the Russian Murat Gassiev in the final of the World Boxing Super Series. Curiously, he has not required a great deal of activity (five fights since 2018) to place himself at the top of boxing.

Tags: boxing, sports Center
Boxing: The judge who imprisoned Poli Daz denounces him for planning his murder from prison
Boxing: Josh Taylor retained his world titles with great equality against Catterall
Abel ‘Authentic’ Mina seeks to get into the Top 5 of Latin American boxing
BOXING 4195