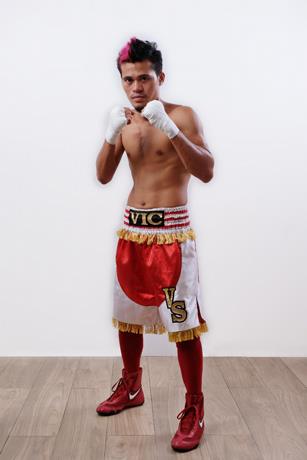 The Filipino Victor "Vic" Saludar, regular champion of the minimum weight of the World Boxing Association (WBA), will arrive this

The Filipino Victor “Vic” Saludar, regular champion of the minimum weight of the World Boxing Association (WBA), will arrive this Tuesday in the Dominican Republic for his fight against the Dominican Erick “Mini PacMan” Rosa, scheduled for next day 21 in the Catalonia hotel in Santo Domingo.

Saludar will arrive in the country at four in the afternoon this Tuesday at the José Francisco Peña Gómez International Airport of Las Américas.

As stated by the same Filipino boxer, the decision to arrive in the Dominican Republic a week before the fight has the purpose of “fine-tuning some details” regarding his preparation and not encountering surprises along the way.

“Vic” Saludar will expose his world title against the Dominican Rosa by decision of the World Boxing Association (WBA) within the framework of a card organized by the Dominican promoter Shuan Boxing, chaired by Belgium Peña.

Recently, the Philippine champion stated that he would not come to the Dominican Republic on vacation, but rather to convincingly defeat the “Mini PacMan” Rosa and return the world champion title to his country.}

&#8220;The Dominicans do not have world champions and they will continue like this, because I am doing the best preparation of my life to convincingly defeat the Mini PacMan on their own land,&#8221; added Saludar.

The Filipino explained that he has seen videos with fights of the Dominican, in whom he recognizes a boxer of &#8220;certain danger.&#8221;

On his side, &#8220;Mini PacMan&#8221; Rosa is undefeated, with 4-0, all his triumphs against foreign rivals, including Mexico, Venezuela and Nicaragua. He is also the current double Latin champion and won the interim WBA title.

&#8220;Vic&#8221; Saludar warned the Mini Pink PacMan to stop dreaming about his girdle, because it will return to the Philippines

The event will be broadcast to the world by various digital platforms and also for television in the Dominican Republic.