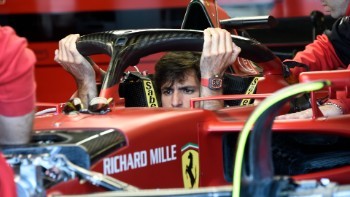 start the 2022 British Formula 1 Grand Prix! Many mysteries still to be discovered in this first free practice session. The layout of Silverstone is now ready to host the greatest show in the world. A circuit in which the weather is very changeable and decisive, as Fernando warned Alonso in this week’s preview. It will be important to see how the weekend progresses and whether or not there will finally be rain.

The single-seaters return to the circuit where they were unleashed last year the tensions between Verstappen and Hamilton. Both collided in Copse: the Red Bull was out of the race, after receiving a strong impact. Hamilton won the race despite being penalized with ten seconds for being considered guilty of the incident.

Ferrari arrives at this GP with his second biggest evolution of the season, also more ambitious, after Barcelona. The change may be larger than originally expected. New floor, but special attention will have to be paid to the diffuser, which will be combined with the wing of Leclerc’s car with which he came back in Montreal. It is also expected that the speed can be increased with the Open DRS on the straights.

Also Alpine It comes with major improvements. Alonso had been slightly optimistic with this evolution in his cars, although he remains cautious. The pontoons are modified again. In addition to the area of ​​the engine cover that links with the rear suspensions.

Finally, changes also in Red Bull in a circuit in which Mercedes hopes to feel like a winner again in full controversy over the racist comment by Nelson P.iquet on Lewis Hamilton. There have been multiple messages of support, by the way, for the English pilot. Vettel and even Max Verstappen, Piquet’s son-in-law.